After several decades of keeping up with the time, since November my kitchen clock has only been showing the correct time every 12-hours. Before I got to buy a new one, I was asked what I wanted to Christmas, and there was money to spend

Guess what Santa left for me:

The Hermle Ravensburg is a mechanical clock, driven by the pull of gravity on a cylindrical 1kg of Iron (I assume).

Setup requires installing the energy source (i.e., hang the cylinder on one end of a chain), attach clock to a wall where there is enough distance for the cylinder to slowly ‘fall’, set the time, add energy (i.e., pull the chain so the cylinder is at maximum height), and set the pendulum swinging.

The chain is long enough for eight days of running. However, for the clock to be visible from outside my kitchen I had to place it over a shelf, and running time is limited to 2.5 days before energy has to be added.

The swinging pendulum provides the reference beat for the running of the clock. The cycle time of a pendulum swing is proportional to the square root of the distance of the center of mass from the pivot point. There is an adjustment ring for fine-tuning the swing time (just visible below the circular gold disc of the pendulum).

I used my knowledge of physics to wind the center of mass closer to the pivot to reduce the swing time slightly, overlooking the fact that the thread on the adjustment ring moved a smaller bar running through its center (which moved in the opposite direction when I screwed the ring towards the pivot). Physics+mechanical knowledge got it right on the next iteration.

I have had the clock running 1-second per hour too slow, and 1-second per hour too fast. Current thinking is that the pendulum is being slowed slightly when the cylinder passes on its slow fall (by increased air resistance). Yes dear reader, I have not been resetting the initial conditions before making a calibration run

What else remains to learn, before summer heat has to be adjusted for?

While the clock face and hands may be great for attracting buyers, it has serious usability issues when it comes to telling the time. It is difficult to tell the time without paying more attention than normal; without being a few feet of the clock it is not possible to tell the time by just glancing at it. The see though nature of the face, the black-on-black of the end of the hour/minute hands, and the extension of the minute hand in the opposite direction all combine to really confuse the viewer. 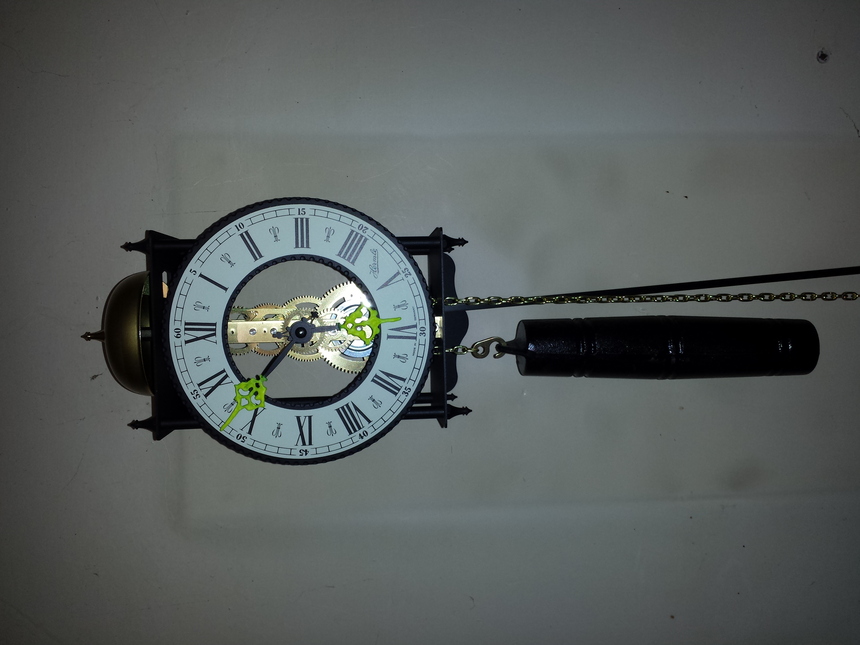 There is a discrete ting at the end of every hour. This could be slightly louder, and I plan to add some weight to the bell hammer. Had the bell been attached slightly off center, fine volume adjustment would have been possible.