I recently read a very interesting study involving both group size and learning, and Jaakko Peltokorpi kindly sent me a copy of the data.

That is the good news; the not so good news is that the experiment was not about software engineering, but the manual assembly of a contraption of the experimenters devising. Still, this experiment is an example of the impact of group size and learning (through repeating the task).

Subjects worked in groups of one to four people and repeated the task four times. Time taken to assemble a bespoke, floor standing rack with some odd-looking connections between components (the image in the paper shows an image of something that might function as a floor standing book-case, if shelves were added, apart from some component connections getting in the way) was measured.

The following equation is a very good fit to the data (code+data). There is theory explaining why

applies, but the division by group-size was found by suck-it-and-see (in another post I found that time spent planning increased with teams size).

There is a strong repetition/group-size interaction. As the group size increases, repetition has less of an impact on improving performance.

The following plot shows one way of looking at the data (larger groups take less time, but the difference declines with practice): 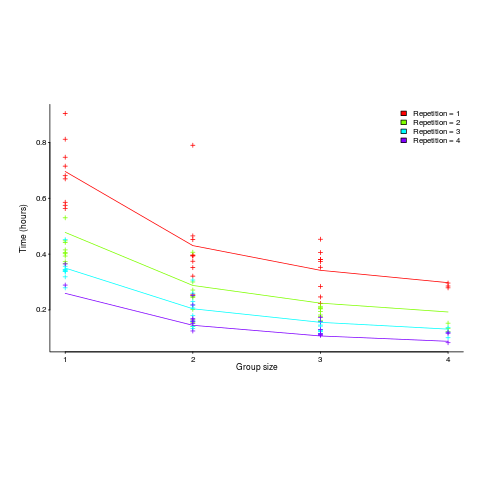 and here is another (a group of two is not twice as fast as a group of one; with practice smaller groups are converging on the performance of larger groups): 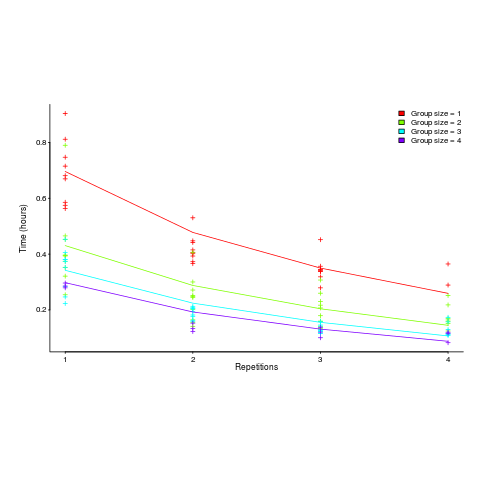 Would the same kind of equation fit the results from solving a software engineering task? Hopefully somebody will run an experiment to find out

A recent blog post by Allan Kelly caught my attention; on Monday Allan sent me some comments on the draft of my book and I got to ask for a copy of his data (you don’t need your own software engineering data before sending me comments).

During an Agile training course he gives, Allan runs an exercise based on an extended version of the XP game. The basic points are: people form into teams, a task is announced, teams have to estimate how long it will take them to complete the task and then to plan the task implementation. Allan recorded information on team size, time spent estimating and time spent planning (no information on the tasks, which were straightforward, e.g., fold a paper airplane).

We don’t have task information, but we do have two timing measurements for each team. With a bit of suck-it-and-see analysis, I found that the following equation explained 50% of the variance (code+data):

There was some flexibility in the numbers, depending on the method used to build the regression model.

The introduction of each new team member incurs a fixed overhead. Given that everybody is sitting together around a table, this is not surprising; or, perhaps the problem was so simply that nobody felt the need to give a personal response to everything said by everybody else; or, perhaps the exercise was run just before lunch and people were hungry.

I am not aware of any connection between time spent estimating and time spent planning, but then I know almost nothing about this kind of XP game exercise. That square-root looks interesting (an exponent of 0.4 or 0.6 was a slightly less good fit). Thoughts and experiences anybody?