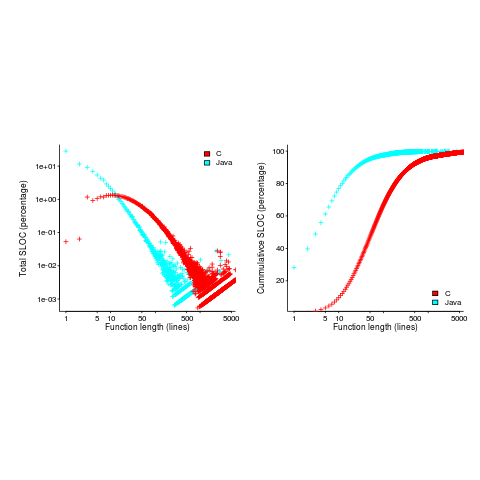 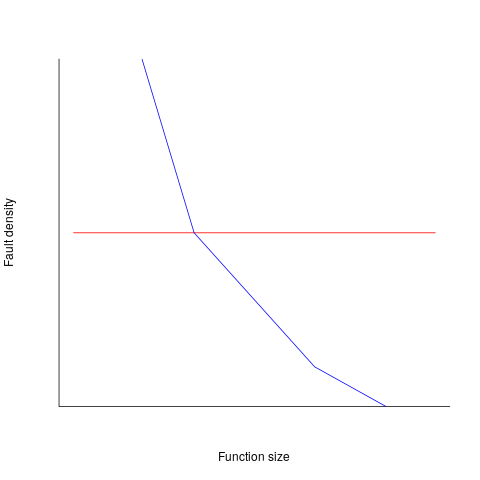 Which of the following two if-statements do you think will be processed by readers in less time, and with fewer errors, when given the value of x, and asked to specify the output?

Ok, the behavior is not identical, in that the else if-arm produces different output than the preceding if-arm.

The paper Syntax, Predicates, Idioms — What Really Affects Code Complexity? analyses the results of an experiment that asked this question, including more deeply nested if-statements, the use of negation, and some for-statement questions (this post only considers the number of conditions/depth of nesting components). A total of 1,583 questions were answered by 220 professional developers, with 415 incorrect answers.

Based on the coefficients of regression models fitted to the results, subjects processed the nested form both faster and with fewer incorrect answers (code+data). As expected performance got slower, and more incorrect answers given, as the number of intervals in the if-condition increased (up to four in this experiment).

I think short-term memory is involved in this difference in performance; or at least I can concoct a theory that involves a capacity limited memory. Comprehending an expression (such as the conditional in an if-statement) requires maintaining information about the various components of the expression in working memory. When the first subexpression of x > 0 && x < 10 || x > 20 && x < 30 is false, and the subexpression after the || is processed, there is no now forget-what-went-before point like there is for the nested if-statements. I think that the single expression form is consuming more working memory than the nested form.

Does the result of this experiment (assuming it is replicated) mean that developers should be recommended to write sequences of conditions (e.g., the first if-statement example) about as:

Duplicating code is not good, because both arms have to be kept in sync; ok, a function could be created, but this is extra effort. As other factors are taken into account, the costs of the nested form start to build up, is the benefit really worth the cost?

Answering this question is likely to need a lot of work, and it would be a more efficient use of resources to address questions about more commonly occurring conditions first.

A commonly occurring use is testing a single range; some of the ways of writing the range test include:

Does one way of testing the range require less effort for readers to comprehend, and be more likely to be interpreted correctly?

There have been some experiments showing that people are more likely to give correct answers to questions involving information expressed as linear syllogisms, if the extremes are at the start/end of the sequence, such as in the following:

and not the following (which got the lowest percentage of correct answers):

Your author ran an experiment to find out whether developers were more likely to give correct answers for particular forms of range tests in if-conditions.

Out of a total of 844 answers, 40 were answered incorrectly (roughly one per subject; it was a paper and pencil experiment, so no timings). It's good to see that the subjects were so competent, but with so few mistakes made the error bars are very wide, i.e., too few mistakes were made to be able to say that one representation was less mistake-prone than another.

I hope this post has got other researchers interested in understanding developer performance, when processing if-statements, and that they will be running more experiments help shed light on the processes involved.

In the following code, how often will the variable b be incremented, compared to a?

If we assume that the variables x and y have values drawn from the same distribution, then the condition (x < y) will be true 50% of the time (ignoring the situation where both values are equal), i.e., b will be incremented half as often as a.

If the value of z is drawn from the same distribution as x and y, how often will c be incremented compared to a?

The test (x < y) reduces the possible values that x can take, which means that in the comparison (x < z), the value of x is no longer drawn from the same distribution as z.

Since we are assuming that z and y are drawn from the same distribution, there is a 50% chance that (z < y).

If the condition (x < z) is replaced by (x > z), the expected probability remains unchanged.

If the values of x, y, and z are not drawn from the same distribution, things get complicated.

are needed to ensure that both probabilities sum to one; the exponents

control the distribution of values. What is the probability that (x < y) is true?

Probability theory tells us that

is the probability distribution function for

the the cumulative probability distribution for

Doing the maths gives the probability of (x < y) being true as:

The (x < z) case can be similarly derived, and combining everything is just a matter of getting the algebra right; it is left as an exercise to the reader :-)