I'm a happy Xcode user, mainly using it for C++ programming. It's a relatively nice IDE (except for when I need to break out the big guns and fire up Vim for heavy lifting).

There are a few plugins that make it an even nicer IDE.

This is as much a note to myself as anyone else.

SCXcodeMiniMap
Puts a wee "mini map" beside your scrollbar. Can be useful if you write insane unnavigable source files. (Hint: aim for code that doesn't need it)
https://github.com/stefanceriu/SCXcodeMiniMap

BBUDebuggerTuckAway
Hides the debugger view as soon as you start typing into the editor. Handy. Saves a common keystroke.
https://github.com/neonichu/BBUDebuggerTuckAway
AdjustFontSize
Quite keyboard shortcut for adjust font sizes. Useful as I switch between a retina display and various monitor sizes depending on where I'm working.
https://github.com/zats/AdjustFontSize-Xcode-Plugin

BlockJump
CTRL-] and [ navigate up and down by block.
https://github.com/tyeen/BlockJump

XAlign
One i'm just trying out. I find this kind of alignment can help reveal code intent, although it adds extra work to maintain. So let's make the computer do the work. Command-shift-X
https://github.com/qfish/XAlign

A common annoyance with Emacs when working on a code base that has duplicate file names is that the mode line tends to display the buffer names as “one.py:<1>”, “one.py:<2>” etc etc. That doesn’t help much with telling them apart and I find it confusing. I was introduced to the Uniquify library a while ago. This library allows youÂ some control over how you want to display the buffer names of buffers that contain files with duplicate names.

Austin Bingham from Good With Computers

In the previous articles in this series [1] we uncovered a small mystery regarding how Python's super() works, and we looked at some of the underlying mechanics of how super() really works. In this article we'll see how those details work together to resolve the mystery.

As you'll recall, the mystery we uncovered has to do with how a single use of super() seemed to invoke two separate implementations of a method in our SortedIntList example. As a reminder, our class diagram looks like this: 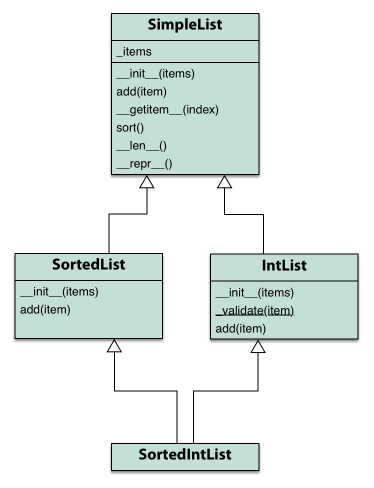 How does SortedIntList do what it does? From the code it seems that SortedIntList does no coordination between its base classes, and certainly the base classes don't know anything about each other. Yet somehow SortedIntList manages to invoke both implementations of add(), thereby enforcing all of the necessary constraints.

super() with no arguments

We've already looked at method resolution order, C3 linearization, and the general behavior of super instances. The final bit of information we need in order to resolve the mystery is how super() behaves when called with no arguments. [2] Both IntList and SortedList use super() this way, in both their initializers and in add().

For instance methods such as these, calling super() with no arguments is the same as calling super() with the method's class as the first argument and self as the second. In other words, it constructs a super proxy that uses the MRO from self starting at the class implementing the method. Knowing this, it's easy to see how, in simple cases, using super() is equivalent to "calling the base class implementation". In these cases, type(self) is the same as the class implementing the method, so the method is resolved using everything in that class's MRO except the class itself. The next entry in the MRO will, of course, be the class's first base class, so simple uses of super() are equivalent to invoking a method on the first base class.

A key point to notice here is that type(self) will not always be the same as the class implementing a specific method. If you invoke super() in a method on a class with a subclass, then type(self) may well be that subclass. You can see this in a trivial example:

Understanding this point is the final key to seeing how SortedIntList works. If type(self) in a base class is not necessarily the type of the class implementing the method, then the MRO that gets used by super() is not necessarily the MRO of the class implementing the method...it may be that of the subclass. Since the entries in type(self).mro() may include entries that are not in the MRO for the implementing class, calls to super() in a base class may resolve to implementations that are not in the base class's own MRO. In other words, Python's method resolution is - as you might have guessed - extremely dynamic and depends not just on a class's base classes but its subclasses as well.

Method resolution order to the rescue

With that in mind, let's finally see how all of the elements - MRO, no-argument super(), and multiple inheritance - coordinate to make SortedIntList work. As we've just seen, when super() is used with no arguments in an instance method, the proxy uses the MRO of self which, of course, will be that of SortedIntList in our example. So the first thing to look at is the MRO of SortedIntList itself:

A critical point here is that the MRO contains IntList and SortedList, meaning that both of them can contribute implementations when super() is used.

Next, let's examine the behavior of SortedIntList when we call its add() method. [3] Because IntList is the first class in the MRO which implements add(), a call to add() on a SortedIntList resolves to IntList.add():

And this is where things get interesting!

In the end, the call to super().add(item) in IntList.add() takes the MRO of SortedIntList, find's IntList in that MRO, and uses everything after IntList in the MRO to resolve the method invocation. Since that MRO-tail looks like this:

and since method resolution uses the first class in an MRO that implements a method, the call resolves to SortedList.add() which, of course, enforces the sorting constraint.

So by including both of its base classes in its MRO [4] - and because IntList and SortedList use super() in a cooperative way - SortedIntList ensures that both the sorting and type constraint are enforced.

We've seen that a subclass can leverage MRO and super() to do some pretty interesting things. It can create entirely new method resolutions for its base classes, resolutions that aren't apparent in the base class definitions and are entirely dependent on runtime context.

Used properly, this can lead to some really powerful designs. Our SortedIntList example is just one instance of what can be done. At the same time, if used naively, super() can have some surprising and unexpected effects, so it pays to think deeply about the consequences of super() when you use it. For example, if you really do want to just call a specific base class implementation, you might be better off calling it directly rather than leaving the resolution open to the whims of subclass developers. It may be cliche, but it's true: with great power comes great responsibility.

For more information on this topic, you can always see the Inheritance and Subtype Polymorphism module of our Python: Beyond the Basics course on PluralSight. [5]

Interesting story how a development team at Facebook debugged a resource handling issue in their iOS app. What they found is another strong argument for using techniques like RAII to automate your resource management if you are working in non-garbage collected OO languages.

A couple of interesting articles about debugging. Debugging doesn’t seem to get a lot of attention when people are taught about programming, I assume you’re supposed to acquire this skill by osmosis, but it is actually one of those skills that should receive much greater attention because it’s one of those that separates highly productive developers from, well, not so productive ones. Why I’m Productive in Clojure. I’ve long been a fan of Lisp and Lisp-like languages, even though I wasn’t originally that happy with having Lisp inflicted on me when I was at university.