I'm writing the backend for my current iOS App in Javascript using node.js, AWS Lambda along with DynamoDB.

My AWS Lambda code is mostly AWS Lambda agnostic except for the initial handler methods, this makes them fairly testable outside of AWS. However, they depend on the DynamoDB. It's quite easy to write Unit Tests that run against a live version of DynamoDB but I wanted to run against a local instance, ideally an in-memory instance so that it would be quick (not that running against a real instance is that slow) and so that I could have a clean dB each time.


In order to run this locally you'll need:
My goal was to have a clean dB for each individual Unit Test. The simplest way to achieve this I thought was to create an in-memory of dynamoDB and destroy it after each Unit Test.

This uses the child_process npm package to create an instance before each test, store the handle to the process in local-ish variable and following the tasks just kill it. The important points here are that the '-inMemory' option is used meaning that when the dB instance is killed and another re-started everything is effectively wiped without having to do everything.
The problem I had with this approach is that in addition to creating the dB each time I also needed to create a table. Whilst the documentation for local dynamoDB says that one of the differences between the AWS hosted & the local versions is that CreateTable completes immediately it seems that the function does indeed complete immediately the table isn't immediately available. This meant the UT using the table often failed with:

1) awsLambdaToTest The querying an empty db for a user Returns{}:
ResourceNotFoundException: Cannot do operations on a non-existent table

I'm going to jump ahead and show the completed Unit Test file and explain the various things I had to do in order to get it working. This shows the tests.

Rather than attempting to create & destroy the dB for each Unit Test I settled with creating it once per  Unit Test file. This is handled in the begin() & after() functions. Here the local instance of dynamoDB is spawned using the child_process package and reference to the process retained. This is then used to kill it afterwards. The important point to note here is the use of the sleep package & function.

I found when I had multiple test files, each with their own begin() & after() functions that did the same as these, even though kill had purported to have killed the processed (I checked the killed flag) it seemed the process hadn't died immediately. This meant that the before() function in the next set of tests would succesfully connect to the dying instance of dynamoDB. Then later when any operation was performed it would just hang until Mocha timed-out the Unit Test/before handler. I tried various ways to detect that the process was really dead but none worked so settled for a sleep.

Where possible I use Promises. Mocha handles promises quite simply for both hooks (the before*/after* functions) and Unit Tests. The key is to make sure to return the final promise (or pass in the done parameter & call it - though I don't use this mechanism).
Looking at the beforeEach() function createTable() is called which returns a promise (from the AWS.Request type that aws-sdk.DynamoDB.createTable() returns. This promise is then chained too by the synchronous waitFor method. This polls the dB for state of the table. The returned promise will not complete until the table has been created and waitFor has completed.
I am not convinced that waitFor is needed. According to the AWS vs Local DynamoDB guide for local instances tables are created immediately. I added this check as occasionally I was getting resources errors like the one earlier. However, I think the cause for that was because I forgot the return statement before the call to createTable() meaning no Promise was returned to Mocha so it thought the beforeEach() function had completed. I have removed this since in my real Unit Tests and they all seem to work.

That's really it. The hard part wasn't writing the UTs but getting a local instance of DynamoDB running with the table that the functions to test used in the correct state. Again, due to the functions being tested usually returning promises themselves it is necessary to return Promise. The assertion(s) are made synchronously in a then continuation chained to Promise returned from the function being tested and Promise from the whole chain returned.
If an assertion returns false then even though it's within a continuation Mocha detects this and the test fails. If the function under test throws then Mocha also catches this and the test fails.

There's also the this.timeout(5000); at the top of the tests for this file. By default Mocha has 2 second timeout for all tests and hooks. By having the 1 second sleep for starting the dB it's possible for the hook to timeout then causing everything else to fail. The 5 second timeout protects against this.

When creating the local instance it uses the default port of 8000 and is accessible via the localhost hostname alias. This is used to access the dB when creating the reference to it in before(). A local aws.config is also constructed in each of the functions that access the dB in the actual code under test below.

The actual code being tested 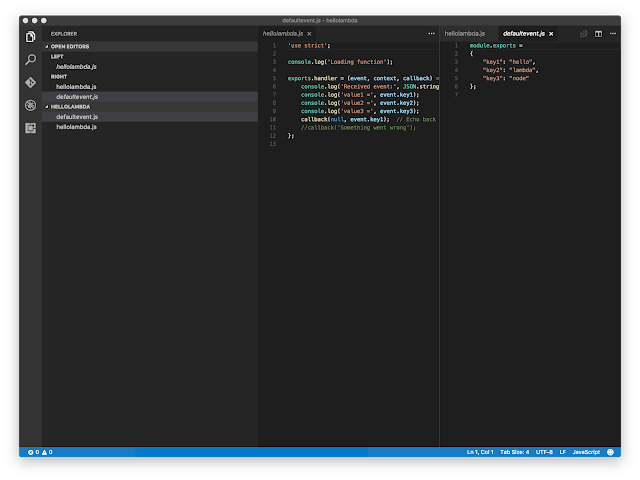 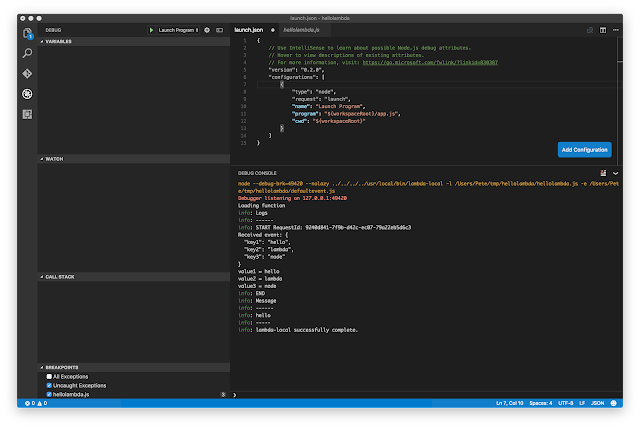 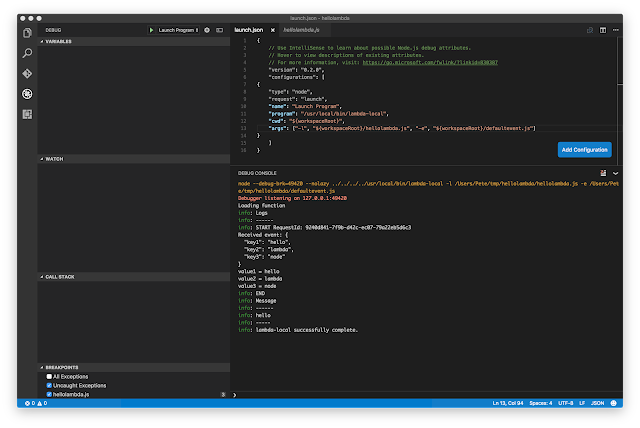