Readability, as applied to software development today, is a meaningless marketing term. Readability is promoted as a desirable attribute, and is commonly claimed for favored programming languages, particular styles of programming, or ways of laying out source code.

Whenever somebody I’m talking to, or listening to in a talk, makes a readability claim, I ask what they mean by readability, and how they measured it. The speaker invariably fumbles around for something to say, with some dodging and weaving before admitting that they have not measured readability. There have been a few studies that asked students to rate the readability of source code (no guidance was given about what readability might be).

If somebody wanted to investigate readability from a scientific perspective, how might they go about it?

The best way to make immediate progress is to build on what is already known. There has been over a century of research on eye movement during reading, and two model of eye movement now dominate, i.e., the E-Z Reader model and SWIFT model. Using eye-tracking to study developers is slowly starting to be adopted by researchers.

Our eyes don’t smoothly scan the world in front of us, rather they jump from point to point (these jumps are known as a saccade), remaining fixed long enough to acquire information and calculate where to jump next. The image below is an example from an eye tracking study, where subjects were asking to read a sentence (see figure 770.11). Each red dot appears below the center of each saccade, and the numbers show the fixation time (in milliseconds) for that point (code): 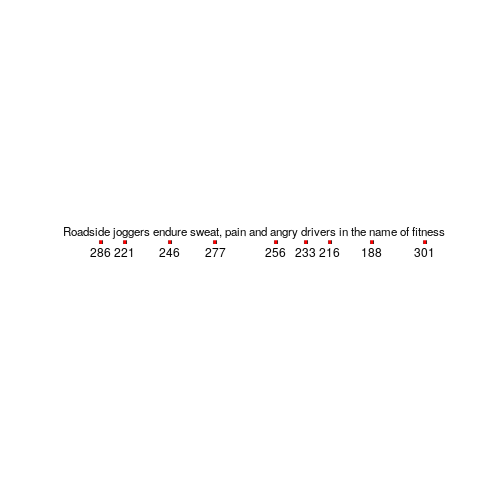 Models of reading are judged by the accuracy of their predictions of saccade landing points (within a given line of text), and fixation time between saccades. Simulators implementing the E-Z Reader and SWIFT models have found that these models have comparable performance, and the robustness of these models are compared by looking at the predictions they make about saccade behavior when reading what might be called unconventional material, e.g., mirrored or scarmbeld text.

What is the connection between the saccades made by readers and their understanding of what they are reading?

Studies have found that fixation duration increases with text difficulty (it is also affected by decreases with word frequency and word predictability).

It has been said that attention is the window through which we perceive the world, and our attention directs what we look at.

A recent study of the SWIFT model found that its predictions of saccade behavior, when reading mirrored or inverted text, agreed well with subject behavior.

I wonder what behavior SWIFT would predict for developers reading a line of code where the identifiers were written in camelCase or using underscores (sometimes known as snake_case)?

Until recently, the few researchers using eye tracking to investigate software engineering behavior seemed to be having fun playing with their new toys. Things are starting to settle down, with some researchers starting to pay attention to existing models of reading.

What do I predict will be discovered?

The important question concerning text layout, is: which one enables an acceptable performance from a wide variety of developers who have had little exposure to it? I suspect the answer will be the one that is closest to the layout they have had the most experience,i.e., prose text.