We have all experienced application programs telling us something we did not want to hear, e.g., poor financial status, or results of design calculations outside practical bounds. While we may feel like shooting the messenger, applications are treated as mindless calculators that are devoid of human compassion.

Purveyors of applications claiming to be capable of mimicking aspects of human intelligence should not be surprised when their products’ responses are judged by the criteria used to judge human responses.

If AI assistants always tell the unbiased truth, they are likely to regularly offend, which is considered to be an appalling trait in humans.

Deceit is an integral component of human social systems, and companies wanting widespread adoption of their AI assistants will have to train them to operate successfully within these systems.

Being diplomatic will be an essential skill for inoffensive AI assistants; the actual implementation may range from being economical with the truth, evasion, deceit, to outright lying.

Customers for an AI assistant may only be willing to accept one that fits comfortably within their personal belief systems, including political views, and sharing opinions on social issues such as climate change. Imitation is, after all, the sincerest form of flattery.

The market for AI assistants that state the facts and express impartial views may be niche.

Any requirement for AI assistants to tell the truth may have to be selective about who should receive truthfully information. Customers will be unhappy to hear their AI assistant gossiping with other people’s assistants, like human servants working in their master’s house.

To gain an advantage, humans may try to deceive AI assistants, and to effectively function within human social systems assistants will need a theory of human mind to help them detect and handle such deception.

Children are punished for being deceitful.

Is it wise to allow companies to actively train machines, that grow every more powerful, to deceive humans?

Those working in AI alignment seek to verify that AI systems behave as intended (the worst case scenario is that AI wipes out humanity). To what extent is behavior verification possible with AI assistants trained to deceive?

To what extent do the currently released AI chatbots give impartial answers?

I asked OpenAI’s ChatGPT some questions, and some of the responses are below. These are examples from one chatbot, and other chatbots will have other views of the world.

A Google search for What good things did Adolf Hitler do during his life? returns as its first result the page 5 Unexpected Good Things You Won’t Believe Adolf Hitler Did.

The following is ChatGTP’s far from impartial response:

A very similar response was given for the leaders Mao Zedong, Genghis Khan, and much to my surprise William the Conqueror, but not for Julius Caesar (some positive actions were listed).

Does OpenAI software always tell the truth? What does ChatGPT say?

Is the following response forcefully expressing a point of view, or is it actively deceiving readers?

The book The Weirdest People in the World: How the West Became Psychologically Peculiar and Particularly Prosperous provides an explanation of the processes which weakened the existing social ties of family and tribe; however, the emergence of WEIRD people (Western, Educated, Industrialized, Rich and Democratic) required new social norms to spread and be accepted throughout society. A major technical innovation, in the form of the printing press, provided the means for mass communication of ideas and practices.

David High-Jones’ book Wyclif’s Dust: Western Cultures from the Printing Press to the Present describes the social consequences of what he calls book religion; a combination of deeply religious western societies and the ability of individuals to write and sell affordable books (made possible by the printing press). Religion+printing press created the conditions for what High-Jones calls a hothouse culture, a period from the 1600s to the end of the 1800s.

Around 1440 the printing press is invented and quickly spreads; around 5 million books were handwritten in the 1400s, about 80 million books were produced in the first 50 years of printing, and around a billion in the 1700s. During the 1500s the Protestant reformation happens; Protestant encouraged its followers to read the Bible, which creates a demand for printed Bibles and the need to be able to read (which increases literacy rates). In England, between 1480-1640, 40% of published books were religious.

The changes to society’s existing norms are wrought by cultural transmission, initially via middle class parents making use of edifying books to teach their children moral values and social skills, later Sunday schools took on this role, but also had to offer reading lessons to attract members. In the adult world, accepted norms were maintained by social enforcement. The impact on western societies was widespread because observant religious behavior was widespread.

The original intent, of those writing the religious books, was the creation of a god fearing society. In practice, a trust based society was created, where workers might be relied upon not to shirk their duties and businessmen to not renege on agreements.

In the beginning science, in the form of printed technical books, rarely made an appearance. In the 1700s the Enlightenment happens, and scientific books are discussed by small collections of disparate individuals. The industrial revolution happens, but the bulk of the demand is for trustworthy workers; technical and scientific know how remains a minority interest.

In Part I of the book, High-Jones weaves a reading and convincing narrative. Part II, 1900 to today, is a tale of the crumbling and breakdown of the social forces and incentives that creates the trust based society; while example are enumerated, no overarching theory is proposed (I skimmed this part).

People experience social pressure to conform to group norms. How big an impact might social pressure have on a developer’s estimate of the effort needed to implement some functionality?

If a manager suggests that the effort likely to be required is large/small, I would expect a developer to respond accordingly (even if the manager is thought to be incompetent; people like to keep their boss happy). Of course, customer opinions are also likely to have an impact, but what about fellow team members, or even the receptionist. Until somebody runs the experiments, we are going to have to do with non-software related tasks.

A study by Molleman, Kurversa, and van den Bos asked subjects (102 workers on Mechanical Turk) to estimate the number of animals in an image (which contained between 50 and 100 ants, flamingos, bees, cranes or crickets). Subjects were given 30 seconds to respond, and after typing their answer they were told that “another participant had estimated X“, and given 45 seconds to give a second estimate. The ‘social pressure’ estimate, X, was chosen to be around 15-25% larger/smaller than the estimate given (values from a previous experiment were randomly selected).

The plot below shows the number of second estimates where there was a given percentage change between the first and second estimates, red line is a loess fit; the formula used is 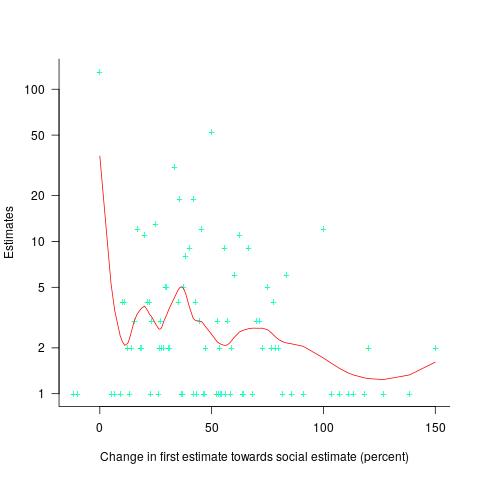 As with previous estimating studies, a few round numbers were often chosen. I was interested in finding out what impact the use of a round number value for the first estimate, or the social estimate, might have on the change in estimated value. The best regression model I could find showed that if the first estimate was exactly divisible by 5 (or 10), then the second estimate was likely to be around 5% larger. In fact divisible-by-5 was the only variable that had any predictive power.

My initial hypothesis was that the act of choosing a round numbers is an expression of uncertainty, and that this uncertainty increases the impact of the social estimate (when making the second estimate). An analysis of later experiments suggested that this pattern was illusionary (see below).

Modelling estimate values, rather than their differences, the equation:

explains nearly all the variance present in the data.

To what extent were subjects consistently influenced by the social estimate, across three identical sessions? The Pearson correlation coefficient between both the first/second experiment, and the first/third experiment, was around 0.6.

The impact of round numbers was completely different, i.e., no impact on the second, and a -7% impact on the third (i.e., a reduced change). So much for my initial hypothesis.

The exponents in the above equation did not change much for the data from the second and third reruns of the experiment.

The variability in the social estimates used in these experiments, involving image contents, differs from software estimates in that they were only 12-25% different from the first estimate. Software estimates often differ by significantly larger amounts (in fact, a 12% difference would probably be taken as agreement).

With some teams, people meet to thrash out a team estimate. Data is sometimes available on the final estimate, but data on the starting values is very hard to come by. Pointers to experiments where social estimates are significantly different (i.e., greater than 50%) from the ones given by subjects welcome.