What useful, practical things might professional software developers learn from the Projects chapter in my evidence-based software engineering book?

This week I checked the projects chapter; what useful things did I learn (combined with everything I learned during all the other weeks spent working on this chapter)?

There turned out to be around three to four times more data publicly available than I had first thought. This is good, but there is a trap for the unweary. For many topics there is one data set, and that one data set may not be representative. What is needed is a selection of data from various sources, all relating to a given topic.

Some data is better than no data, provided small data sets are treated with caution.

Estimation is a popular research topic: how long will a project take and how much will it cost.

After reading all the papers I learned that existing estimation models are even more unreliable than I had thought, and what is more, there are plenty of published benchmarks showing how unreliable the models really are (these papers never seem to get cited).

Models that include lines of code in the estimation process (i.e., the majority of models) need a good estimate of the likely number of lines in the final software system. One issue that nobody had considered was the impact of developer variability on the number of lines written to implement the same functionality, which turns out to be large. Oops.

Machine learning has infested effort estimation research. What the machine learning models actually do is estimate adjustment, i.e., they do not create their own estimate but adjust one passed in as input to the model. Most estimation data sets are tiny, and only contain a few different variables; unless the estimate is included in the training phase, the generated model produces laughable results. Oops.

The good news is that there appear to be lots of recurring patterns in the project data. This is good news because recurring patterns are something to be explained by a theory of software project development (apparent randomness is bad news, from the perspective of coming up with a model of what is going on). I think we are still a long way from having workable theories, but seeing patterns is a good sign that one or more theories will be possible.

I think that the main takeaway from this chapter is that software often has a short lifetime. People in industry probably have a vague feeling that this is true, from experience with short-lived projects. It is not cost effective to approach commercial software development from the perspective that the code will live a long time; some code does live a long time, but most dies young. I see the implications of this reality being a major source of contention with those in academia who have spent too long babbling away in front of teenagers (teaching the creation of idealized software that lives on forever), and little or no time building software systems.

A lot of software is written by teams of people, however, there is not a lot of data available on teams (software or otherwise). Given the difficulty of hiring developers, companies have to make do with what they have, so a theory of software teams might not be that useful in practice.

Literate programming is all well and good for code written to appear in a book that the author hopes will be read for many years, but this is a tiny sliver of the source code ecosystem. The majority of code is never modified, once written, and does not hang around for very long; an investment is source code futures will make a loss unless the returns are spectacular.

What evidence do I have for these claims?

The lifespan evidence is derived from data in my evidence-based software engineering book, and blog posts on software system lifespans, and survival times of Linux distributions. Lifespan in short because Packages are updated, and third-parties change/delete APIs (things may settle down in the future).

People who think source code has a long lifespan are suffering from survivorship bias, i.e., there are a small percentage of programs that are actively used for many years.

Around 60% of functions are only ever modified by one author; based on a study of the change history of functions in Evolution (114,485 changes to functions over 10 years), and Apache (14,072 changes over 12 years); a study investigating the number of people modifying files in Eclipse. Pointers to other studies that have welcome.

One consequence of the short life expectancy of source code is that, any investment made with the expectation of saving on future maintenance costs needs to return many multiples of the original investment. When many programs don’t live long enough to be maintained, those with a long lifespan have to pay the original investments made in all the source that quickly disappeared.

One benefit of short life expectancy is that most coding mistakes don’t live long enough to trigger a fault experience; the code containing the mistake is deleted or replaced before anybody notices the mistake.

This post focuses on one aspect of the question, software lifetime.

The Killed by Google website lists Google services and products that are no more. Cody Ogden, the creator of the site, has open sourced the code of the website; there are product start/end dates!

After removing 20 hardware products from the list, we are left with 134 software services. Some of the software behind these services came from companies acquired by Google, so the software may have been used to provide a service pre-acquisition, i.e., some calculated lifetimes are underestimates.

The plot below shows the number of Google software services (red) having a given lifetime (calculated as days between Google starting/withdrawing service), mainframe software from the 1990s (blue; only available at yearly resolution), along with fitted exponential regression lines (code+data): 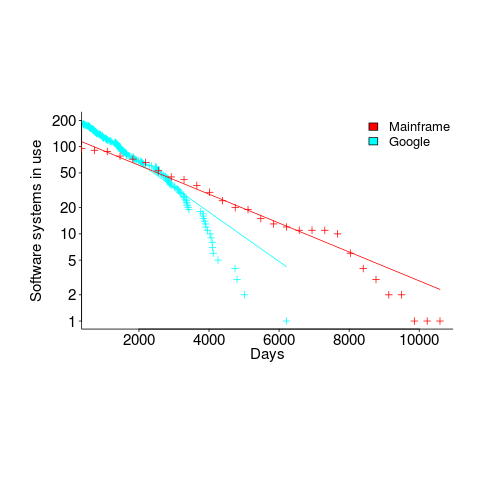 Overall, an exponential is a good fit (squinting to ignore the dozen red points), although product culling is not exponentially ruthless at short lifetimes (newly launched products are given a chance to prove themselves).

One explanation of the difference is market maturity. Mainframe software has been evolving since the 1950s and probably turned over at the kind of rate we saw a few years ago with Internet services. By the 1990s things had settled down a bit in the mainframe world. Will software-based services on the Internet settle down faster than mainframe software? Who knows.

Software system lifetime data is extremely hard to find (this is only the second set I have found). Any pointers to other lifetime data very welcome, e.g., a collection of Microsoft product start/end dates