Many claims are made about the advantages of pair programming. The claim that the performance of pairs is better than the performance of individuals may actually be the result of the mathematical consequences of two people working together, rather than working independently (at least for some tasks).

Let’s say that individuals have to find a fault in code, and then fix it. Some people will find the fault and then its fix much more quickly than others. The data for the following analysis comes from the report Experimental results on software debugging (late Rome period), via Lutz Prechelt and shows the density of the time taken by each developer to find and fix a fault in a short Fortran program.

Fixing faults is different from many other development tasks in that if often requires a specific insight to spot the mistake; once found, the fixing task tends to be trivial. 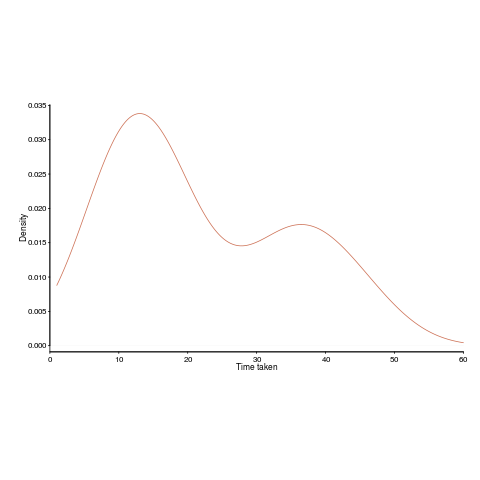 How long might pairs of developers have taken to solve the same problem. We can take the existing data, create pairs, and estimate (based on individual developer time) how long the pair might take (code+data).

By switching to pairs we appear to have reduced the average time taken by 30%. However, the apparent saving is nothing more than the mathematical consequence of removing larger values from the sample.

When working as a pair, there will be some communication overhead (unless one is much faster and ignores the other developer), so the saving will be slightly less.

There is an analytic solution for the distribution of the minimum of two values drawn from the same distribution. If

is a probability density function and

The presence of two peaks in the above plot means the data is not going to be described by a single distribution. So, the above formula look interesting but are not useful (in this case).