The average new graduate is likely to do more programming during the first month of a software engineering job, than they did during a year as an undergraduate. Programming courses for undergraduates is really about filtering out those who cannot code.

Long, long ago, when I had some connection to undergraduate hiring, around 70-80% of those interviewed for a programming job could not write a simple 10-20 line program; I’m told that this is still true today. Fluency in any language (computer or human) takes practice, and the typical undergraduate gets very little practice (there is no reason why they should, there are lots of activities on offer to students and programming fluency is not needed to get a degree).

There is lots of academic discussion around which language students should learn first, and what languages they should be exposed to. I have always been baffled by the idea that there was much to be gained by spending time teaching students multiple languages, when most of them barely grasp the primary course language. When I was at school the idea behind the trendy new maths curriculum was to teach concepts, rather than rote learning (such as algebra; yes, rote learning of the rules of algebra); the concept of number-base was considered to be a worthwhile concept and us kids were taught this concept by having the class convert values back and forth, such as base-10 numbers to base-5 (base-2 was rarely used in examples). Those of us who were good at maths instantly figured it out, while everybody else was completely confused (including some teachers).

My view is that there is no major teaching/learning impact on the choice of first language; it is all about academic fashion and marketing to students. Those who have the ability to program will just pick it up, and everybody else will flounder and do their best to stay away from it.

Richard Reid was interested in knowing which languages were being used to teach introductory programming to computer science and information systems majors. Starting in 1992, he contacted universities roughly twice a year, asking about the language(s) used to teach introductory programming. The Reid list (as it became known), was regularly updated until Reid retired in 1999 (the average number of universities included in the list was over 400); one of Reid’s ex-students, Frances VanScoy, took over until 2006. 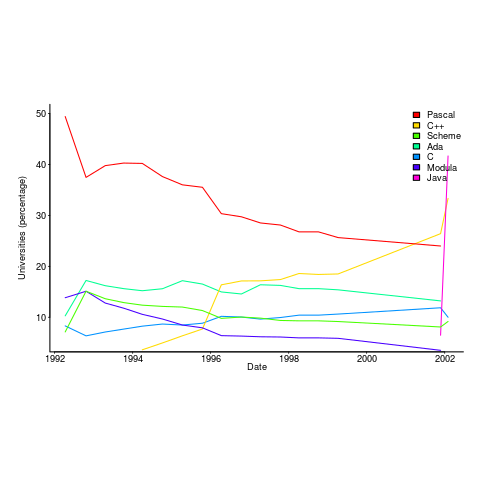 Looking at the list again reminded me how widespread Pascal was as a teaching language. Modula-2 was the language that Niklaus Wirth designed as the successor of Pascal, and Ada was intended to be the grown up Pascal.

While there is plenty of discussion about which language to teach first, doing this teaching is a low status activity (there is more fun to be had with the material taught to the final year students). One consequence is lack of any real incentive for spending time changing the course (e.g., using a new language). The Open University continued teaching Pascal for years, because material had been printed and had to be used up.

C++ took a while to take-off because of its association with C (which was very out of fashion in academia), and Java was still too new to risk exposing to impressionable first-years.

A count of the total number of languages listed, between 1992 and 2002, contains a few that might not be familiar to readers.

I had never heard of Orwell, a vanity language foisted on Oxford Mathematics and Computation students. It used to be common for someone in computing departments to foist their vanity language on students; it enabled them to claim the language was being used and stoked their ego. Is there some law that enables students to sue for damages?

The 1990s was still in the shadow of the 1980s fashion for functional programming (which came back into fashion a few years ago). Miranda was an attempt to commercialize a functional language compiler, with Haskell being an open source reaction.

I was surprised that Turing was so widely taught. More to do with the stature of where it came from (university of Toronto), than anything else.

Fortran was my first language, and is still widely used where high performance floating-point is required.

ISETL is a very interesting language from the 1960s that never really attracted much attention outside of New York. I suspect that Blue is BlueJ, a Java IDE targeting novices.

I last looked at the research on teaching programming around 10 years ago and I have been catching up with what has been going on; in brief: same old, same old. One of the best papers on the subject is still: Language-independent conceptual “Bugs”

The research activity is still focused on making the tools and language ‘better’. There is a defining silence on the possibility that those doing the teaching could not teach their way out of a paper bag. Nobody is brave enough to suggest that teacher training might be a worthwhile investment, or that lectures oriented to what is useful (rather than what the lecturer finds interesting) would be appreciated by students.

My experience with students learning to program is from a very long time ago. The process involved listening to confusing and disjoint lectures, reading books and figuring out what worked by trial and error. Students were not taught to program, they got thrown in at the deep and were expected to survive. Anybody who could handle this stood some chance of being able to handle developing software in the ‘real world'; universities were (accidentally) graduating people with the skills industry needed. However, these days universities are supposed to be customer focused, what industry needs to irrelevant (my experience of sitting on departmental industry panels is that the head of department tells us what they are thinking of doing {i.e., new courses for which there will be lots of paying students} and we try to talk him/her out of the sillier ideas); too many fee paying students find programming too hard, let’s offer computing degrees that don’t require any programming.

Would you hire a recent graduate, for a development role, who had trouble figuring out how to fix syntax errors in their code? Surely, the minimum requirement is somebody who gets some pleasure from coding, even if they don’t want to spend lots of time doing it.

There is a shortage of software developers and flying turkeys are still with us.