A new software release is often accompanied by a changelog which lists new, changed and deleted functionality. When software is developed using a continuous release process, the changelog can be very fine-grained.

The changelog for the Beeminder app contains 3,829 entries, almost one per day since February 2011 (around 180 entries are not present in the log I downloaded, whose last entry is numbered 4012).

Is it possible to use the information contained in the Beeminder changelog to estimate the rate of growth of functionality of Beeminder over time?

My thinking is driven by patterns in a plot of the Renzo Pomodoro dataset. Renzo assigned a tag-name (sometimes two) to each task, which classified the work involved, e.g., @planning. The following plot shows the date of use of each tag-name, over time (ordered vertically by first use). The first and third black lines are fitted regression models of the form

is a constant and

is the number of days since the start of the interval fitted; the second (middle) black line is a fitted straight line.

How might a changelog line describing a day’s change be distilled to a much shorter description (effectively a tag-name), with very similar changes mapping to the same description?

Named-entity recognition seemed like a good place to start my search, and my natural language text processing tool of choice is still spaCy (which continues to get better and better).

spaCy is Python based and the processing pipeline could have all been written in Python. However, I’m much more fluent in awk for data processing, and R for plotting, so Python was just used for the language processing.

The following shows some Beeminder changelog lines after stripping out urls and formatting characters:

The code to extract and print the named-entities in each changelog line could not be simpler.

To maximize the similarity between named-entities appearing on different lines the lemmas are printed, rather than original text (i.e., words appear in their base form).

There are several problems with this simple implementation:

Handling multiple names for the same entity would a lot of work (i.e., I did nothing), ‘uninteresting’ named-entities can be handled by post-processing the output.

A language processing pipeline that is not software-concept aware is of limited value. spaCy supports adding new training models, all I need is a named-entity model trained on manually annotated software engineering text.

The only decent NER training data I could find (trained on StackOverflow) was for BERT (another language processing tool), and the data format is very different. Existing add-on spaCy models included fashion, food and drugs, but no software engineering.

Time to roll up my sleeves and create a software engineering model. Luckily, I found a webpage that provided a good user interface to tagging sentences and generated the json file used for training. I was patient enough to tag 200 lines with what I considered to be software specific named-entities. … and now I have broken the NER model I built…

The following plot shows the growth in the total number of named-entities appearing in the changelog, and the number of unique named-entities (with the 1,996 numbers and dates removed; code+data); 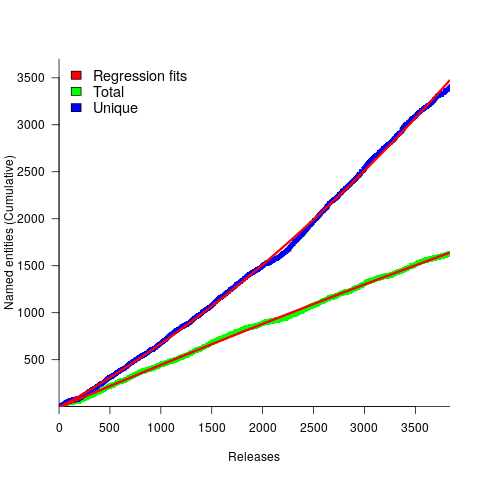 The regression fits (red lines) are quadratics, slightly curving up (total) and down (unique); the linear growth components are: 0.6 per release for total, and 0.46 for unique.

Including software named-entities is likely to increase the total by at least 15%, but would have little impact on the number of unique entries.

This extraction pipeline processes one release line at a time. Building a set of Beeminder tag-names requires analysing the changelog as a whole, which would take a lot longer than the day spent on this analysis.

The Beeminder developers have consistently added new named-entities to the changelog over more than eleven years, but does this mean that more features have been consistently added to the software (or are they just inventing different names for similar functionality)?

It is not possible to answer this question without access to the code, or experience of using the product over these eleven years.

However, staying in business for eleven years is a good indicator that the developers are doing something right.

While it’s great that so much data was uncovered during the writing of the Evidence-based software engineering book, trying to locate data on a particular topic can be convoluted (not least because there might not be any). There are three sources of information about the data:

At the beginning I expected there to be at most a few hundred datasets; easy enough to remember what they are about. While searching for some data, one day, I realised that relying on memory was not a good idea (it was never a good idea), and started including data identification tags in every R file (of which there are currently 980+). This week has been spent improving tag consistency and generally tidying them up.

How might data identification information be extracted from the paper that was the original source of the data (other than reading the paper)?

Named-entity recognition, NER, is a possible starting point; after all, the data has names associated with it.

Tools are available for extracting text from pdf file, and 10-lines of Python later we have a list of named entities:

The catch is that en_core_web_sm is a general model for English, and is not software engineering specific, i.e., the returned named entities are not that good (from a software perspective).

An application domain language model is likely to perform much better than a general English model. While there are some application domain models available for spaCy (e.g., biochemistry), and application datasets, I could not find any spaCy models for software engineering (I did find an interesting word2vec model trained on Stackoverflow posts, which would be great for comparing documents, but not what I was after).

While it’s easy to train a spaCy NER model, the time-consuming bit is collecting and cleaning the text needed. I have plenty of other things to keep me busy. But this would be a great project for somebody wanting to learn spaCy and natural language processing

What information is contained in the undiscussed data columns? Or, from the practical point of view, what information can be extracted from these columns without too much effort?

The number of columns in a csv file is an indicator of the number of different kinds of information that might be present. If a csv is used in the analysis of X, and it contains lots of columns (say more than half-a-dozen), then it might be assumed that it contains more data relating to X.

Column names are not always suggestive of the information they contain, but might be of some use.

Many of the csv files contain just a few rows/columns. A list of csv files that contain lots of data would narrow down the search, at least for those looking for lots of data.

Another possibility is to group csv files by potential use of data, e.g., estimating, benchmarking, testing, etc.

More data is going to become available, and grouping by potential use has the advantage that it is easier to track the availability of new data that may supersede older data (that may contain few entries or apply to circumstances that no longer exist)

My current techniques for locating data on a given subject is either remembering the shape of a particular plot (and trying to find it), or using the pdf reader’s search function to locate likely words and phrases (and then look at the plots and citations).

Suggestions for searching or labelling the data, that don’t require lots of effort, welcome.