The funding for artists and designers/implementors of programming languages shares some similarities.

Rich patrons used to sponsor a few talented painters/sculptors/etc, although many artists had no sponsors and worked for little or no money. Designers of programming languages sometimes have a rich patron, in the form of a company looking to gain some commercial advantage, with most language designers have a day job and work on their side project that might have a connection to their job (e.g., researchers).

Why would a rich patron sponsor the creation of an art work/language?

Possible reasons include: Enhancing the patron’s reputation within the culture in which they move (attracting followers, social or commercial), and influencing people’s thinking (to have views that are more in line with those of the patron).

The during 2009-2012 it suddenly became fashionable for major tech companies to have their own home-grown corporate language: Go, Rust, Dart and Typescript are some of the languages that achieved a notable level of brand recognition. Microsoft, with its long-standing focus on developers, was ahead of the game, with the introduction of F# in 2005 (and other languages in earlier and later years). The introduction of Swift and Hack in 2014 were driven by solid commercial motives (i.e., control of developers and reduced maintenance costs respectively); Google’s adoption of Kotlin, introduced by a minor patron in 2011, was driven by their losing of the Oracle Java lawsuit.

Less rich patrons also sponsor languages, with the idiosyncratic Ivor Tiefenbrun even sponsoring the creation of a bespoke cpu to speed up the execution of programs written in the company language.

The benefits of having a rich sponsor is the opportunity it provides to continue working on what has been created, evolving it into something new.

What opportunities are available for initially self sponsored individuals to support themselves, while they continue to work on what has been created?

The growth of the middle class, and its interest in art, provided a means for artists to fund their work by attracting smaller sums from a wider audience.

In the last 10-15 years, some language creators have fostered a community driven approach to evolving and promoting their work. As well as being directly involved in working on the language and its infrastructure, members of a community may also contribute or help raise funds. There has been a tiny trickle of developers leaving their day job to work full time on ‘their’ language.

The term Hedonism driven development is a good description of this kind of community development.

People have been creating new languages since computers were invented, and I don’t expect this desire to create new languages to stop anytime soon. How long might a language community be expected to last?

Having lots of commercially important code implemented in a language creates an incentive for that language’s continual existence, e.g., companies paying for support. When little or co commercial important code is available to create an external incentive, a language community will continue to be active for as long as its members invest in it. The plot below shows the lifetime of 32 secular and 19 religious 19th century American utopian communities, based on their size at foundation; lines are fitted loess regression (code+data): 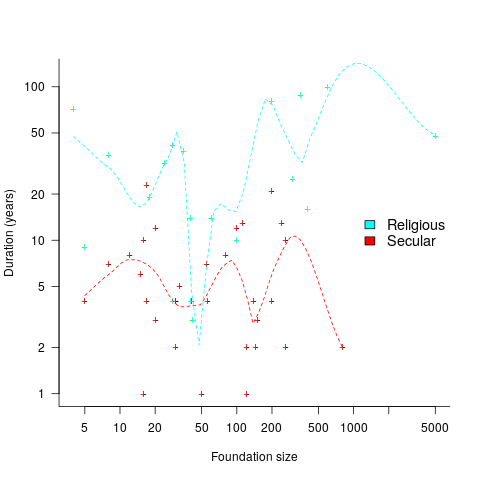 How many self-sustaining language communities are there, and how many might the world’s population support?

My tracking of new language communities is a side effect of the blogs I follow and the few community sites a visit regularly; so a tiny subset of the possibilities. I know of a handful of ‘new’ language communities; with ‘new’ as in not having a Wikipedia page (yet).

I await a future social science PhD thesis for a more thorough analysis of current numbers.

The latest news from Wikileaks, that GCHQ, the UK’s signal intelligence agency, has a sleeper agent working as a trusted member on the Linux kernel core development team should not come as a surprise to anybody.

The Linux kernel is embedded as a core component inside many critical systems; the kind of systems that intelligence agencies and other organizations would like full access.

The open nature of Linux kernel development makes it very difficult to surreptitiously introduce a hidden vulnerability. A friendly gatekeeper on the core developer team is needed.

In the Open source world, trust is built up through years of dedicated work. Funding the right developer to spend many years doing solid work on the Linux kernel is a worthwhile investment. Such a person eventually reaches a position where the updates they claim to have scrutinized are accepted into the codebase without a second look.

The need for the agent to maintain plausible deniability requires an arm’s length approach, and the GCHQ team made a wise choice in targeting device drivers as cost-effective propagators of hidden weaknesses.

Writing a device driver requires the kinds of specific know-how that is not widely available. A device driver written by somebody new to the kernel world is not suspicious. The sleeper agent has deniability in that they did not write the code, they simply ‘failed’ to spot a well hidden vulnerability.

Lack of know-how means that the software for a new device is often created by cutting-and-pasting code from an existing driver for a similar chip set, i.e., once a vulnerability has been inserted it is likely to propagate.

Perhaps it’s my lack of knowledge of clandestine control of third-party computers, but the leak reveals the GCHQ team having an obsession with state machines controlled by pseudo random inputs.

With their background in code breaking I appreciate that GCHQ have lots of expertise to throw at doing clever things with pseudo random numbers (other than introducing subtle flaws in public key encryption).

What about the possibility of introducing non-random patterns in randomised storage layout algorithms (he says waving his clueless arms around)?

Which of the core developers is most likely to be the sleeper agent? His codename, Basil Brush, suggests somebody from the boomer generation, or perhaps reflects some personal characteristic; it might also be intended to distract.

Requiring developers to provide a record of their financial history (say, 10-years worth), before being accepted as a core developer, will rule out many capable people. Also, this approach does not filter out ideologically motivated developers.

The world may have to accept that intelligence agencies are the future of major funding for widely used Open source projects.