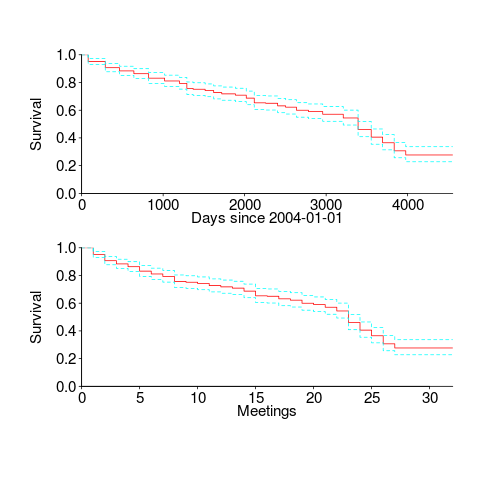 I was at the ISO C language committee meeting, WG14, in London this week (apart from the few hours on Friday morning, which was scheduled to be only slightly longer than my commute to the meeting would have been).

It has been three years since the committee last met in London (the meeting was planned for Germany, but there was a hosting issue, and Germany are hosting next year), and around 20 people attended, plus 2-5 people dialing in. Some regular attendees were not in the room because of schedule conflicts; nine of those present were in London three years ago, and I had met three of those present (this week) at WG14 meetings prior to the last London meeting. I had thought that Fred Tydeman was the longest serving member in the room, but talking to Fred I found out that I was involved a few years earlier than him (our convenor is also a long-time member); Fred has attended more meeting than me, since I stopped being a regular attender 10 years ago. Tom Plum, who dialed in, has been a member from the beginning, and Larry Jones, who dialed in, predates me. There are still original committee members active on the WG14 mailing list.

Having so many relatively new meeting attendees is a good thing, in that they are likely to be keen and willing to do things; it’s also a bad thing for exactly the same reason (i.e., if it not really broken, don’t fix it).

The bulk of committee time was spent discussing the proposals contains in papers that have been submitted (listed in the agenda). The C Standard is currently being revised, WG14 are working to produce C2X. If a person wants the next version of the C Standard to support particular functionality, then they have to submit a paper specifying the desired functionality; for any proposal to have any chance of success, the interested parties need to turn up at multiple meetings, and argue for it.

There were three common patterns in the proposals discussed (none of these patterns are unique to the London meeting):

At the 2016 London meeting Peter Sewell gave a presentation on the Cerberus group’s work on a formal definition of C; this work has resulted in various papers questioning the interpretation of wording in the standard, i.e., possible ambiguities or inconsistencies. At this meeting the submitted papers focused on pointer provenance, and I was expecting to hear about the fancy optimizations this work would enable (which would be a major selling point of any proposal). No such luck, the aim of the work was stated as clearly specifying the behavior (a worthwhile aim), with no major new optimizations being claimed (formal methods researchers often oversell their claims, Peter is at the opposite end of the spectrum and could do with an injection of some positive advertising). Clarifying behavior is a worthwhile aim, but not at the cost of major changes to existing wording. I have had plenty of experience of asking WG14 for clarification of existing (what I thought to be ambiguous) wording, only to be told that the existing wording was clear and not ambiguous (to those reviewing my proposed defect). I wonder how many of the wording ambiguities that the Cerberus group claim to have found would be accepted by WG14 as a defect that required a wording change?

Winner of the best good intentions corrupted by the real world: intmax_t, an integer type capable of representing any value of any signed integer type (i.e., a largest representable integer type). The concept of a unique largest has issues in a world that embraces diversity.

Today’s C development environment is very different from 25 years ago, let alone 40 years ago. The number of compilers in active use has decreased by almost two orders of magnitude, the number of commonly encountered distinct processors has shrunk, the number of very distinct operating systems has shrunk. While it is not a monoculture, things appear to be heading in that direction.

The relevance of WG14 decreases, as the number of independent C compilers, in widespread use, decreases.

What is the purpose of a C Standard in today’s world? If it were not already a standard, I don’t think a committee would be set up to standardize the language today.

Is the role of WG14 now, the arbiter of useful common practice across widely used compilers? Documenting decisions in revisions of the C Standard.

Work on the Cobol Standard ran for almost 60-years; WG14 has to be active for another 20-years to equal this.