During 2021 I sent around 100 emails whose first line started something like: “I have been reading your interesting blog post…”, followed by some background information, and then a request for software engineering data. Sometimes the request for data was specific (e.g., the data associated with the blog post), and sometimes it was a general request for any data they might have.

So far, these 100 email requests have produced one dataset. Around 80% failed to elicit a reply, compared to a 32% no reply for authors of published papers. Perhaps they don’t have any data, and don’t think a reply is worth the trouble. Perhaps they have some data, but it would be a hassle to get into a shippable state (I like this idea because it means that at least some people have data). Or perhaps they don’t understand why anybody would be interested in data and must be an odd-ball, and not somebody they want to engage with (I may well be odd, but I don’t bite :-).

Some of those who reply, that they don’t have any data, tell me that they don’t understand why I might be interested in data. Over my entire professional career, in many other contexts, I have often encountered surprise that data driven problem-solving increases the likelihood of reaching a workable solution. The seat of the pants approach to problem-solving is endemic within software engineering.

Others ask what kind of data I am interested in. My reply is that I am interested in human software engineering data, pointing out that lots of Open source is readily available, but that data relating to the human factors underpinning software development is much harder to find. I point them at my evidence-based book for examples of human centric software data.

In business, my experience is that people sometimes get in touch years after hearing me speak, or reading something I wrote, to talk about possible work. I am optimistic that the same will happen through my requests for data, i.e., somebody I emailed will encounter some data and think of me

What is different about 2021 is that I have been more willing to fail, and not just asking for data when I encounter somebody who obviously has data. That is to say, my expectation threshold for asking is lower than previous years, i.e., I am more willing to spend a few minutes crafting a targeted email on what appear to be tenuous cases (based on past experience).

In 2022 I plan to be even more active, in particular, by giving talks and attending lots of meetups (London based). If your company is looking for somebody to give an in-person lunchtime talk, feel free to contact me about possible topics (I’m always after feedback on my analysis of existing data, and will take a 10-second appeal for more data).

As its name suggests, extreme value theory deals with extreme deviations from the average, e.g., how often will rainfall be heavy enough to cause a river to overflow its banks.

The initial list of statistical topics to I thought ought to be covered in my evidence-based software engineering book included extreme value theory. At the time, and even today, there were/are no books covering “Statistics for software engineering”, so I had no prior work to guide my selection of topics. I was keen to cover all the important topics, had heard of it in several (non-software) contexts and jumped to the conclusion that it must be applicable to software engineering.

Years pass: the draft accumulate a wide variety of analysis techniques applied to software engineering data, but, no use of extreme value theory.

Something else does not happen: I don’t find any ‘Using extreme value theory to analyse data’ books. Yes, there are some really heavy-duty maths books available, but nothing of a practical persuasion.

The book’s Extreme value section becomes a subsection, then a subsubsection, and ended up inside a comment (I cannot bring myself to delete it).

It appears that extreme value theory is more talked about than used. I can understand why. Extreme events are newsworthy; rivers that don’t overflow their banks are not news.

Just over a month ago a discussion cropped up on the UK’s C++ standards’ panel mailing list: was email traffic down because of COVID-19? The panel’s convenor, Roger Orr, posted some data on monthly volumes. Oh, data

Monthly data is a bit too granular for detailed analysis over relatively short periods. After some poking around Roger was able to send me the date&time of every post to the WG21‘s Core and Lib reflectors, since February 2016 (there have been various changes of hosts and configurations over the years, and date of posts since 2016 was straightforward to obtain).

During our email exchanges, Roger had mentioned that every now and again a huge discussion thread comes out of nowhere. Woah, sounds like WG21 could do with some extreme value theory. How often are huge discussion threads likely to occur, and how huge is a once in 10-years thread that they might have to deal with?

The plots below show the maximum number of monthly emails that are expected to occur (y-axis) within a given number of months (x-axis), for WG21’s Core and Lib email lists. The circles are actual occurrences, and dashed lines 95% confidence intervals; GEP was used for these fits (code+data): 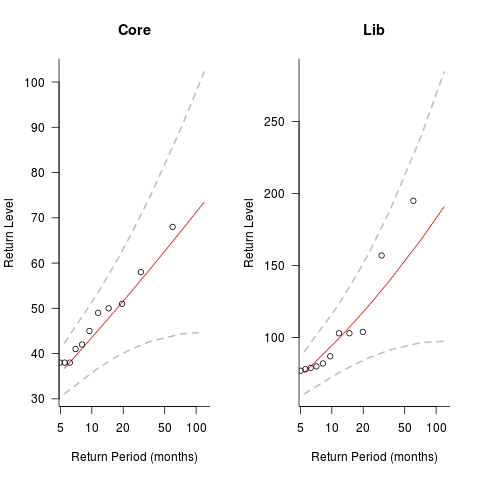 The model used is very simplistic, and fails to take into account the growth in members joining these lists and traffic lost when a new mailing list is created for a new committee subgroup.

If any readers have suggests for uses of extreme value theory in software engineering, please let me know.

Postlude. This discussion has reordered events. My original interest in the mailing list data was the desire to find some evidence for the hypothesis that the volume of email increased as the date of the next WG21 meeting approached. For both Core and Lib, the volume actually decreases slightly as the date of the next meeting approaches; see code for details. Also, the volume of email at the weekend is around 60% lower than during weekdays.

I regularly email researchers referring to a paper of theirs I have read, and asking for a copy of the data to use as an example in my evidence-based software engineering book; of course their work is cited as the source.

Around a third of emails don’t receive any reply (a small number ask why they should spend time sorting out the data for me, and I wrote a post to answer this question). If there is no reply after roughly 6-months, I follow up with a reminder, saying that I am still interested in their data (maybe 15% respond). If the data looks really interesting, I might email again after 6-12 months (I have outstanding requests going back to 2013).

I put some effort into checking that a current email address is being used. Sometimes the work was done by somebody who has moved into industry, and if I cannot find what looks like a current address I might email their supervisor.

I have had replies to later email, apologizing, saying that the first email was caught by their spam filter (the number of links in the email template was reduced to make it look less like spam). Sometimes the original email never percolated to the top of their todo list.

There are around 135 unreplied email requests (the data was automatically extracted from my email archive and is not perfect); the list of papers is below (the title is sometimes truncated because of the extraction process).

Given that I have collected around 620 software engineering datasets (there are several ways of counting a dataset), another 135 would make a noticeable difference. I suspect that much of the data is now lost, but even 10 more datasets would be nice to have.

After the following list of titles is a list of the 254 author last known email addresses. If you know any of these people, please ask them to get in touch.

If you are an author of one of these papers: ideally send me the data, otherwise email to tell me the status of the data (I’m summarising responses, so others can get some idea of what to expect).

Author emails (automatically extracted and manually checked to remove people who have replied on other issues; I hope I have caught them all).