Linguistically most is a quantifier (it’s a proportional quantifier); a word-phrase used to convey information about the number of something, e.g., all, any, lots of, more than half, most, some.

A corpus analysis of most (432,830 occurrences) and more than half (4,857 occurrences) found noticeable usage differences. Perhaps the study’s most interesting finding, from a software engineering perspective, was that most tended to be applied to vague and uncountable domains (i.e., there was no expectation that the population of items could be counted), while uses of more than half almost always had a ‘survey results’ interpretation (e.g., supporting data cited as collaboration for 80% of occurrences; uses of most cited data for 19% of occurrences).

Readers will be familiar with software related claims containing the most qualifier, which are actually opinions that are not grounded in substantive numeric data.

When most is used in a numeric based context, what percentage (of a population) is considered to be most (of the population)?

When deciding how to describe a proportion, a writer has the choice of using more than half, most, or another qualifier. Corpus based studies find that the distribution of most has a higher average percentage value than more than half (both are left skewed, with most peaking around 80-85%).

The percentage appearing in the first sentence of the two seen by subjects varied, e.g., “44% of the tiklets are hullaw.”, “12% of the puggles are entand.”, “68% of the plipers are sesare.” The percentage boundary where each subjects’ true/false answer switched was calculated (i.e., the mean of the percentages present in the questions’ each side of true/false boundary; often these values were 46% and 52%, whose average is 49; this is an artefact of the question wording).

The plot below shows the number of subjects whose true/false boundary occurred at a given percentage (code+data): 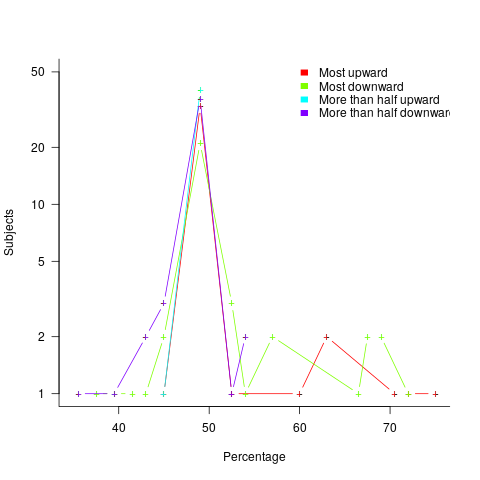 When asked, the majority of subjects had a 50% boundary for most/more than half+upward/downward. A downward entailment causes some subjects to lower their 50% boundary.

So now we know (subject to replication). Most people are likely to agree that 50% is the boundary for most/more than half, but some people think that the boundary percentage is higher for most.

When asked to write a sentence, percentages above 50% attract more mosts than more than halfs.

Most is preferred when discussing vague and uncountable domains; more than half is used when data is involved.

For many, Ludwig Wittgenstein would probably be the philosopher that springs to mind. Wittgenstein became famous as the world’s first Perl programmer, with statements such as: “If a lion could talk, we could not understand him.” and “Whereof one cannot speak, thereof one must be silent.”

Noam Chomsky, a linguist, might be another choice, based on his specification of the Chomsky hierarchy (which neatly categorizes grammars). But generative grammars (for which he is famous in linguistics) is about generating language, not understanding what has been said/written.

My choice for the most important/influential philosopher of source code is Paul Grice. A name, I suspect, that is new to most readers. The book to quote (and to read if you enjoy the kind of books philosophers write) is “Studies in the Way of Words”.

But source code is about human/computer communication, you say. Yes, but so many developers seem to behave as-if they were involved in human/human communication.

The source code chapter of my empirical software engineering book is Gricean, with a Relevance theory accent.

More easily digestible books on Grice’s work (for me at least) are: “Relevance: Communication and Cognition” by Sperber and Wilson, and the more recent “Meaning and Relevance” by Wilson and Sperber.