Over the last decade, testing compilers using automatically generated source code has been a popular research topic (for those working in the compiler field; Csmith kicked off this interest). Compilers are large complicated programs, and they will always contain mistakes that lead to faults being experienced. Previous posts of mine have raised two issues on the use of automatically generated tests: a financial issue (i.e., fixing reported faults costs money {most of the work on gcc and llvm is done by people working for large companies}, and is intended to benefit users not researchers seeking bragging rights for their latest paper), and applicability issue (i.e., human written code has particular characteristics and unless automatically generated code has very similar characteristics the mistakes it finds are unlikely to commonly occur in practice).

My claim that mistakes in compilers found by automatically generated code are unlikely to be the kind of mistakes that often lead to a fault in the compilation of human written code is based on the observations (I don’t have any experimental evidence): the characteristics of automatically generated source is very different from human written code (I know this from measurements of lots of code), and this difference results in parts of the compiler that are infrequently executed by human written code being more frequently executed (increasing the likelihood of a mistake being uncovered; an observation based on my years working on compilers).

An interesting new paper, Compiler Fuzzing: How Much Does It Matter?, investigated the extent to which fault experiences produced by automatically generated source are representative of fault experiences produced by human written code. The first author of the paper, MichaÃ«l Marcozzi, gave a talk about this work at the Papers We Love workshop last Sunday (videos available).

The question was attacked head on. The researchers instrumented the code in the LLVM compiler that was modified to fix 45 reported faults (27 from four fuzzing tools, 10 from human written code, and 8 from a formal verifier); the following is an example of instrumented code:

The instrumented compiler was used to build 309 Debian packages (around 10 million lines of C/C++). The output from the builds were (possibly miscompiled) built versions of the packages, and log files (from which information could be extracted on the number of times the fixing patches were reached, and the number of cases where the check needed to fix the fault was triggered).

Each built package was then checked using its respective test suite; a package built from miscompiled code may successfully pass its test suite.

A bitwise compare was run on the program executables generated by the unfixed and fixed compilers. 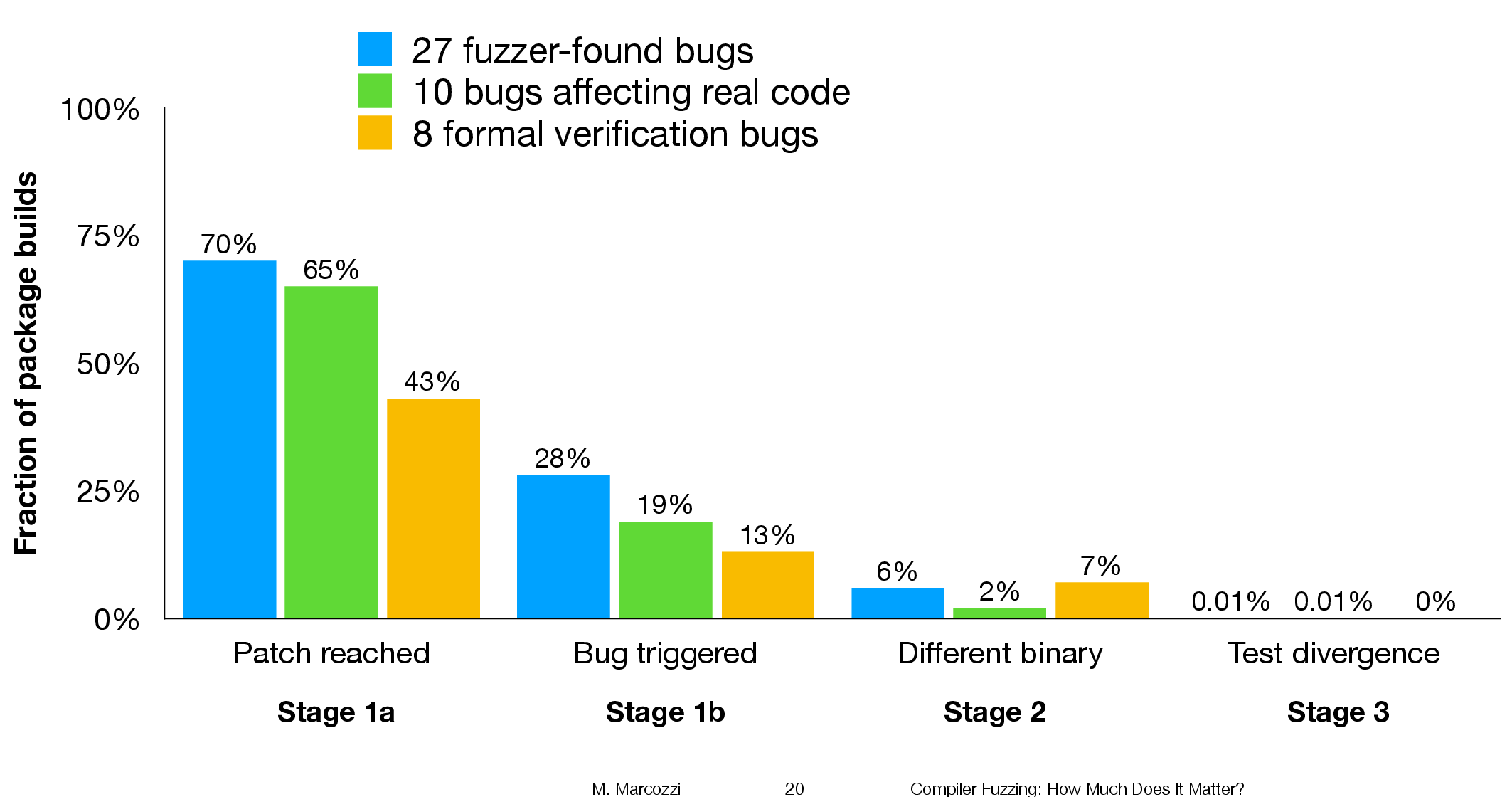 The takeaway from the above figure is that many packages are affected by the coding mistakes that have been fixed, but that most package test suites are not affected by the miscompilations.

To find out whether there is a difference, in terms of impact on Debian packages, between faults reported in human and automatically generated code, we need to compare number of occurrences of “Fault possibly triggered”. The table below shows the break-down by the detector of the coding mistake (i.e., Human and each of the automated tools used), and the number of fixed faults they contributed to the analysis.

Human, Csmith and EMI each contributed 10-faults to the analysis. The fixes for the 10-fault reports in human generated code were triggered 593 times when building the 309 Debian packages, while each of the 10 Csmith and EMI fixes were triggered 1,043 and 948 times respectively; a lot more than the Human triggers :-O. There are also a lot more bitwise compare differences for the non-Human fault-fixes.

Is the difference due to a few packages being very different from the rest?

The table below breaks things down by each of the 10-reported faults from the three Detectors.

Ok, two Human fault-fix locations are never reached when compiling the Debian packages (which is a bit odd), but when the locations are reached they are just not triggering the fault conditions as often as the automatic cases.

This is odd. At best I would expect fault experiences from human and automatically generated code to have the same characteristics.

A fault is experienced in software when there is a mistake in the code, and a program is fed the input values needed for this mistake to generate faulty behavior.

There is suggestive evidence that the distribution of coding mistakes and inputs generating fault experiences both have an influence of fault discovery.

Testing is one technique, it involves feeding inputs into a program and checking the resulting behavior. What are ‘good’ input values, i.e., values most likely to discover problems? There is no shortage of advice for manually writing tests, suggesting how to select input values, but automatic generation of inputs is often somewhat random (relying on quantity over quality).

Probabilistic grammar driven test generators are trivial to implement. The hard part is tuning the rules and the probability of them being applied.

In most situations an important design aim, when creating a grammar, is to have one rule for each construct, e.g., all arithmetic, logical and boolean expressions are handled by a single expression rule. When generating tests, it does not always make sense to follow this rule; for instance, logical and boolean expressions are much more common in conditional expressions (e.g., controlling an if-statement), than other contexts (e.g., assignment). If the intent is to mimic typical user input values, then the probability of generating a particular kind of binary operator needs to be context dependent; this might be done by having context dependent rules or by switching the selection probabilities by context.

Given a grammar for a program’s input (e.g., the language grammar used by a compiler), decisions have to be made about the probability of each rule triggering. One way of obtaining realistic values is to parse existing input, counting the number of times each rule triggers. Manually instrumenting a grammar to do this is a tedious process, but tool support is now available.

Once a grammar has been instrumented with probabilities, it can be used to generate tests.

Probabilities based on existing input will have the characteristics of that input. A recent paper on this topic (which prompted this post) suggests inverting rule probabilities, so that common becomes rare and vice versa; the idea is that this will maximise the likelihood of a fault being experienced (the assumption is that rarely occurring input will exercise rarely executed code, and such code is more likely to contain mistakes than frequently executed code).

I would go along with the assumption about rarely executed code having a greater probability of containing a mistake, but I don’t think this is the best test generation strategy.

What input is likely to interact with coding mistakes to be the root cause of faults experienced by a customer? I have no good answer to this question. But, given there are customer input contains patterns (at least in the world of source code, and I’m told in other application domains), I would generate test cases that are very similar to existing input, but with one sub-characteristic changed.

The availability of tools that automate the profiling of a program’s existing input, followed by the generation of input having slightly, or very, different characteristics make it easier to answer some very tough questions about program behavior.