Traditionally the management of software development projects divides them into phases, e.g., requirements, design, coding and testing. A mistake introduced in one phase may not be detected until a later phase. There is long-standing folklore that earlier mistakes detected in later phases are much much more costly to fix persists, despite the original source of this folklore being resoundingly debunked. Fixing a mistake later is likely to a bit more costly, but how much more costly? A lack of data prevents reliable analysis; this question also suffers from different projects having different cost-to-fix profiles.

This post addresses the time-to-fix question (cost involves all the resources needed to perform the fix). Does it take longer to correct mistakes when they are detected in phases that come after the one in which they were made?

The data comes from the paper: Composing Effective Software Security Assurance Workflows. The 35,367 (yes, thirty-five thousand) logged fixes, from 39 projects drawn from three organizations, contains information on: phases in which the mistake was made and fixed, time taken, person ID, project ID, date/time, plus other stuff

Every project has its own characteristics that affect time-to-fix. Project 615, avionics software developed by organization A, has the most fixes (7,503) and is analysed here.

The primary reason for doing a review and inspection is to check the correctness (i.e., lack of mistakes) in the corresponding phase. If there is a time-to-fix penalty for mistakes found in these symbiotic-phases, I suspect it will be different from the time-to-fix penalty between major phases (which for simplicity, I’m assuming is major-phase independent).

The plot below shows time-to-fix for mistakes having a given ‘distance’ between introduction/fix phase, for fixes taking at least 1, 5 and 10-minutes (code+data): 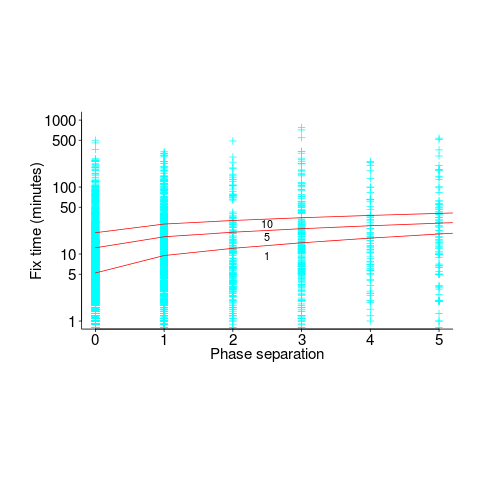 There is a huge variation in time-to-fix, and the regression lines (which have the form:

) explains just 6% of the variance in the data, i.e., there is a small increase with phase separation, but it is almost down in the noise.

All but one of the 38 people who worked on the project made multiple fixes (30 made more than 20 fixes), and may have got faster with practice. Adding the number of previous fixes by people making more than 20 fixes to the model gives:

, and improves the model by less than 1-percent.

Fixing mistakes is a human activity, and individual performance often has a big impact on fitted models. Adding person ID to the model as a multiplication factor: i.e.,

, improves the variance explained to 14% (better than a poke in the eye, just). The fitted value of

The answer to the time-to-fix question posed earlier (for project 615), is that it does take slightly longer to fix a mistake detected in phases occurring after the one in which the mistake was introduced. The phase difference is tiny, with differences in human performance having a bigger impact.