Who are the historians of the computing? The requirement I used for deciding who qualifies (for this post), is that the person has written multiple papers on the subject over a period that is much longer than their PhD thesis (several people have written history of some aspect of computing PhDs and then gone on to research other areas).

Maarten Bullynck. An academic who is a historian of mathematics and has become interested in software; use HAL to find his papers, e.g., What is an Operating System? A historical investigation (1954â€“1964).

Martin Campbell-Kelly. An academic who has spent his research career investigating computing history, primarily with a software orientation. Has written extensively on a wide variety of software topics. His book “From Airline Reservations to Sonic the Hedgehog: A History of the Software Industry” is still on my pile of books waiting to be read (but other historian cite it extensively). His thesis: â€œFoundations of computer programming in Britain, 1945-55â€³, can be freely downloadable from the British Library; registration required.

James W. Cortada. Ex-IBM (1974-2012) and now working at the Charles Babbage Institute. Written extensively on the history of computing. More of a hardware than software orientation. Written lots of detail oriented books and must have pole position for most extensive collection of material to cite (his end notes are very extensive). His “Buy The Digital Flood: The Diffusion of Information Technology Across the U.S., Europe, and Asia” is likely to be the definitive work on the subject for some time to come. For me this book is spoiled by the author towing the company line in his analysis of the IBM antitrust trial; my analysis of the work Cortada cites reaches the opposite conclusion.

Nathan Ensmenger. An academic; more of a people person than hardware/software. His paper Letting the Computer Boys Take Over contains many interesting insights. His book The Computer Boys Take Over Computers, Programmers, and the Politics of Technical Expertise is a combination of topics that have been figured and back with references and topics still being figured out (I wish he would not cite Datamation, a trade mag back in the day, so often).

Michael S. Mahoney. An academic who is sadly no longer with us. A historian of mathematics before becoming involved with primarily software.

Jeffrey R. Yost. An academic. I have only read his book “Making IT Work: A history of the computer services industry”, which was really a collection of vignettes about people, companies and events; needs some analysis. Must try to track down some of his papers (which are not available via his web page :-(.

Who have I missed? This list is derived from papers/books I have encountered while working on a book, not an active search for historians. Suggestions welcome.

I have been reading two very different computer books written for a general readership: Giant Brains or Machines that Think, published in 1949 (with a retrospective chapter added in 1961) and LET ERMA DO IT, published in 1956.

‘Giant Brains’ by Edmund Berkeley, was very popular in its day.

Berkeley marvels at a computer performing 5,000 additions per second; performing all the calculations in a week that previously required 500 human computers (i.e., people using mechanical adding machines) working 40 hours per week. His mind staggers at the “calculating circuits being developed” that can perform 100,00 additions a second; “A mechanical brain that can do 10,000 additions a second can very easily finish almost all its work at once.”

The chapter discussing the future, “Machines that think, and what they might do for men”, sees Berkeley struggling for non-mathematical applications; a common problem with all new inventions. Automatic translator and automatic stenographer (typist who transcribe dictation) are listed. There is also a chapter on social control, which is just as applicable today.

This was the first widely read book to promote Shannon‘s idea of using the algebra invented by George Boole to analyze switching circuits symbolically (THE 1940 Masters thesis).

The ‘ERMA’ book paints a very rosy picture of the future with computer automation removing the drudgery that so many jobs require; it is so upbeat. A year later the USSR launched Sputnik and things suddenly looked a lot less rosy. 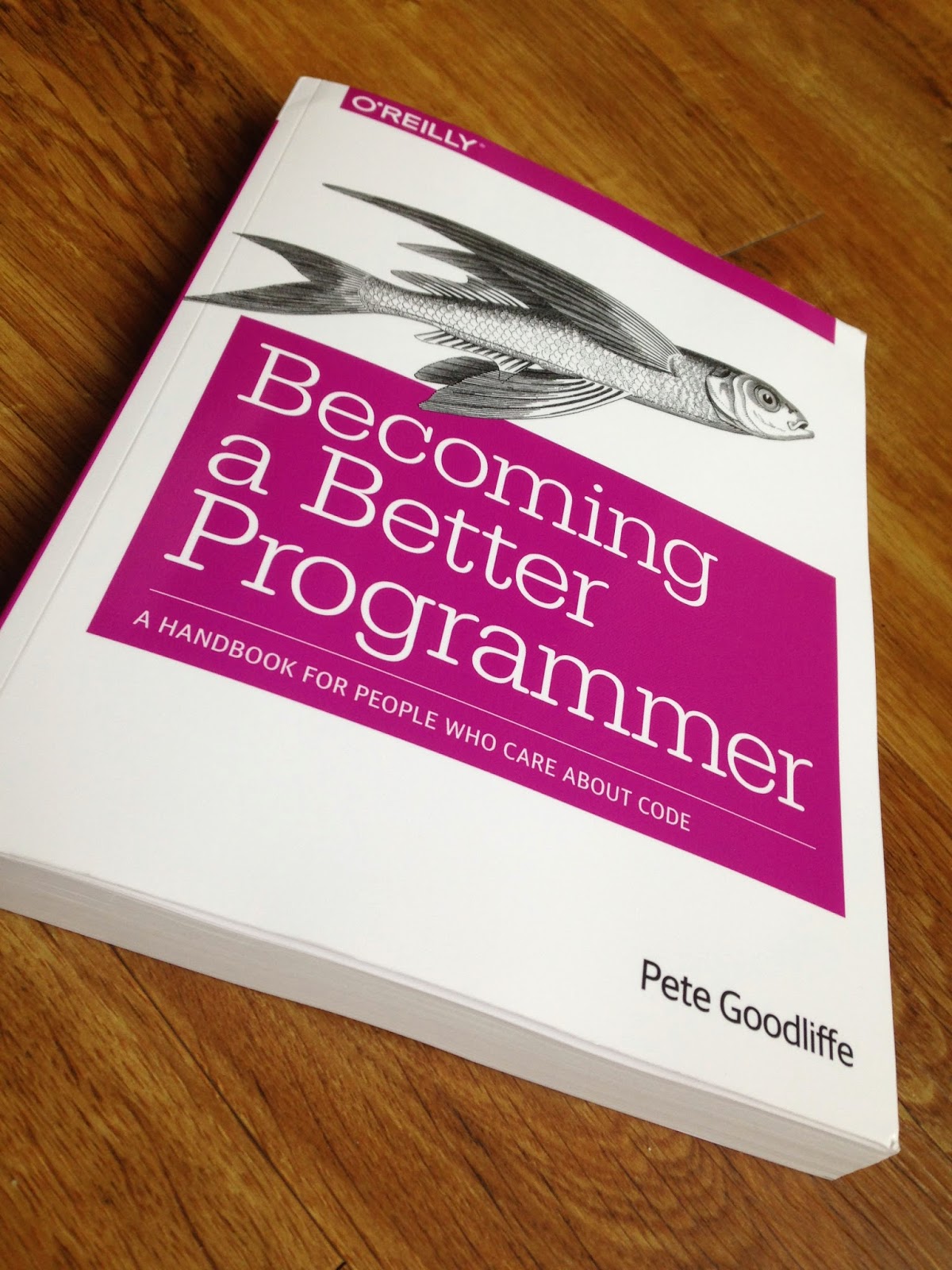 My new book, Becoming a Better Programmer, is fully edited, laid out, and is now available as a final product for your reading pleasure, published by O'Reilly. You can purchase it in printed form or as a digital version for your e-reader of choice.

Find out more about the book from the O'Reilly product page. You can view the full table of contents there. Or head over to Amazon to purchase. If you are a Safari subscriber, you can read it here. Grab your iBook here.

The cover image is a flying fish. I'll leave it to your imagination to work out the significance.

It's great to finally see this labour of love come to fruition, and I do hope that stands as a useful resource for programmers today.

One of my favourite parts of the book is a family in-joke in the "advance praise" at the front. Nestled amongst the luminaries and expert programmers who graciously contributed their honest thoughts on the book is another very honest opinion: 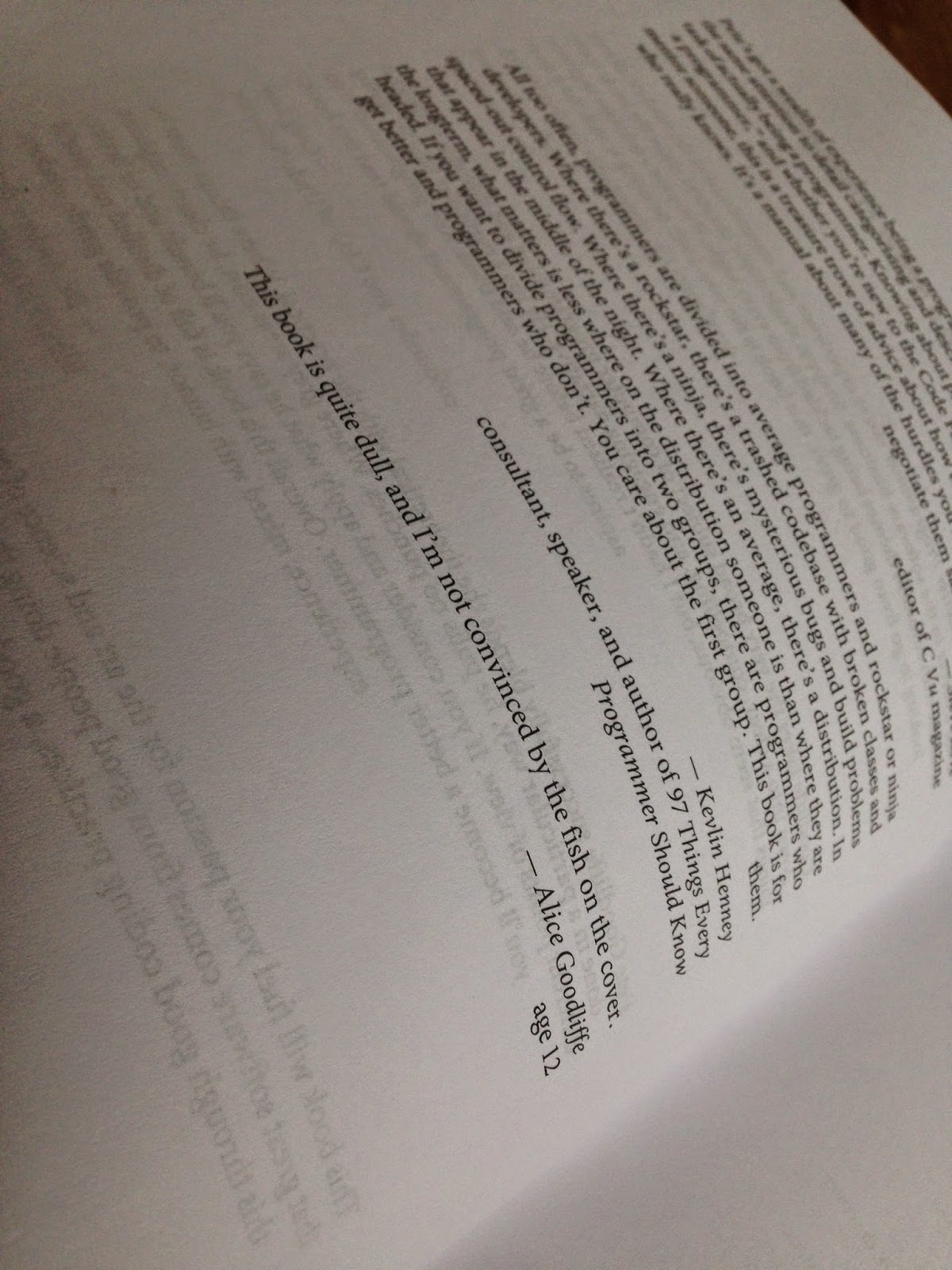 My latest Becoming a Better Programmer column is published in the September issue of C Vu magazine (26.4). It called Testing Times and surveys the world of developer testing, covering the what, why, and how of programmer-driven testing. We look at feedback loops, TDD, unit testing, integration testing, system testing and more.
C Vu is a magazine produced by the ACCU - an excellent organisation for programmers. It has a great community, great publications, and an awesome conference. Check it out.
Meanwhile, my book: Becoming a Better Programmer, is nearing print. It's gone through tech review, copy edit, and layout is almost complete. You can still access the early release at http://shop.oreilly.com/product/0636920033929.do. 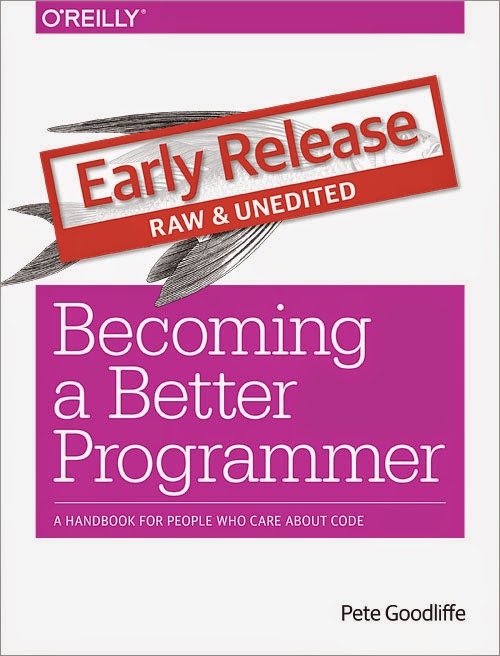 I am delighted to announce that I have signed a contract to publish my latest book, Becoming a Better Programmer with the excellent folks at O'Reilly.

We have now made an early access version available with a number of the chapters. It's already looking excellent, and I can't wait to get the final version out. 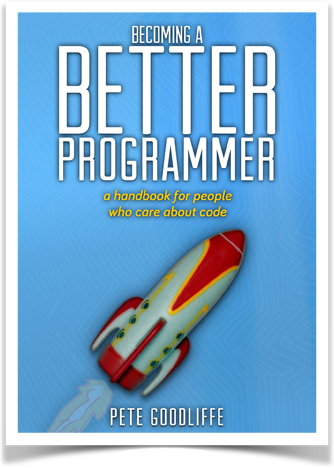 After many years of gestation my latest book is available for purchase as an early-access pre-release.

Called Becoming a Better Programmer, it is a handbook for people who are about code.

This early access edition already contains 14 chapters, and there are many more coming. There is a free "sample" version available so you get a taster of what you'll be purchasing.

As a pre-release, it's available at an introductory price. The price will go steadily upwards as the book nears completion. Buy now to enjoy the best value! (That's the sales pitch - I suck at that kind of thing.)

It would genuinely love to hear any feedback, praise or criticism that will help improve the book. Suggestions for topics to cover are also of real interest.

My honest hope is that this book does just what it says on the cover: helps many developers improve their skills, to become more productive programmers.