On my phone and computer I use WhatsApp, Signal, Slack, Keybase, Discord, IRC, XMPP/Jabber and Element/Matrix. In addition, I occasionally use the messaging features of Mastodon, Twitter and even LinkedIn. I’ve never used Telegram, Line, WeChat, Session, Wire or Status chat, but they exist too, along with many others.

It would be better if I could chat with people using the app I prefer, rather than the one I am forced to use.

Of course, the only useful chat app is the one your friends and family are on, so it’s pointless to debate the finer points in each service’s favour, but here I go anyway.

The importance of decentralisation has been re-emphasised for me this week after the freenode IRC debacle. A single controlling entity, even when it is currently benign (as some people believe Signal is) is not a guarantee that things will stay this way. Thank goodness you can connect your usual IRC network to libera.chat: imagine what would happen to Signal users if they realised someone unscrupulous had acquired control.

Matrix does not solve all our problems. Notably:

Despite these limitations, Matrix is the only chat network that is even attempting to provide what users need, and it seems to be doing a pretty good job of it.

I think we should work together to address its weaknesses, and adopt it wherever we can.

So, I recommend Matrix (specifically element.io) for group and individual chat.

I have recently started using Kupfer again as my application launcher in Ubuntu MATE, and I found it lacked the ability to suspend the computer.

Here is the plugin I wrote to support this.

To install it, quit Kupfer, create a directory in your home dir called .local/share/kupfer/plugins, and create this file suspend.py inside:

You should now see a “Suspend” item if you search for it in the Kupfer interface.

PeerTube’s API documentation gives an example of how to upload a video, but it is missing a couple of important aspects, most notably how to provide multiple tags use form-encoded input, so my more complete script is below. Use it like this:

You will need to edit the script to provide your own PeerTube server URL, channel ID (a number), video description, tags etc. Output and errors from the script will be placed in curl-out.txt. Read the API docs to see what numbers you need to use for category, license etc.

Category Theory is an incredibly exciting and challenging area of Maths, that (among other things) can really help us understand what programming is on a fundamental level, and make us better programmers.

By far the best explanation of Category Theory that I have ever seen is a series of videos by Bartosz Milewski on YouTube.

The videos have quite a bit of background noise, and they were not available on PeerTube, so I asked for permission to edit and repost them, and Bartosz generously agreed! The conversation was in the comments section of Category Theory 1.1: Motivation and Philosophy and I reproduce it below.

So, I present these awesome videos, with background noise removed using Audacity, for your enjoyment:

Andy Balaam: Utterly brilliant lecture series. Is it available under a free license? I’d like to try and clean up audio and repost it to PeerTube, if that is permitted.
Bartosz Milewski: You have my permission. I consider my lectures public domain.

It’s hard to believe it’s already a year since the release of RFC 8771 (The Internationalized Deliberately Unreadable Network NOtation), which for me at least made me think about IP addresses in a whole new way.

So, it seems fitting for the anniversary to be able to release proper support for this standard in the Rust universe, with Rust I-DUNNO version 1.0 released. You can find it on Rust’s crates.io at crates.io/crates/i-dunno and the API documentation is at docs.rs/i-dunno.

Also, because for a standard like this to receive the wide adoption it deserves, it’s important that young people have a chance to interact with it, playing with encodings to get a real feel for what it’s like to use in practice, I’m proud to announce the I-DUNNO Creator. On that page you can enter an IP address (IPv4 or IPv6) and see it transformed immediately into a candidate I-DUNNO, with live information about the Confusion Level of the I-DUNNO, as specified in the standard. You can find the source code for the I-DUNNO Creator in the web-i-dunno repo.

The I-DUNNO Creator is built on the Rust package, making use of Rust’s highly-developed WASM support to compile the code into a form that works naturally in a web browser.

I hope that by offering both systems programmers and the young people of today and their new-fangled web sites the opportunity to create I-DUNNOs, I can contribute a little to spreading the word about deliberately unreadable notations to new audiences.

Note: the current implementation is limited to generate only I-DUNNOs with no padding bits. As specified in the standard, I-DUNNOs may end with arbitrary padding, and adding this functionality to rust-i-dunno is left as an exercise for the reader: merge requests welcome!

It asks you to fill in a very large list of details, most of which are the same every time, but it doesn’t remember what you typed last time.

I didn’t want to write a Python script or similar to enter my results, because I wanted to check I’d done it right, and because there is a captcha at the end that is clearly intended to prevent automation like that.

However, with a Selenium IDE script, I can drive my browser, watching what it does and checking the input, and manually filling in the captcha and final double-check page.

In case it’s helpful, here is the script I created: report-covid-test.side.

You can create one for each child if you have several, filling in school name, NHS number, names, date of birth etc. in the script and re-using it, modifying it each time to enter the bar code number for the test itself.

I’d recommend loading this script into the Selenium IDE plugin in Firefox, looking through it and editing the values that say “ENTER…HERE”, then clicking Run Script and watching it fill in values.

It doesn’t actually submit the result, so you can always check and modify it manually if something doesn’t work out, before clicking the last couple of buttons to submit.

The Internet is full of outdated Python code for doing things with windows, so here is what I got working today in a Python 3, GTK 3 environment.

This script toggles the window decorations on the active window on and off. I have it bound to Ctrl+NumPadMinus for easy access.

During my work on RFC 8771 The Internationalized Deliberately Unreadable Network NOtation (I-DUNNO) I have come across a number of questions. I am documenting them here so I can send them to the authors and try to improve my understanding of the intention.

This is an excellent RFC, and I thank the authors for their efforts in creating it.

In 4.2. Satisfactory Confusion Level, the RFC states that encodings may be deemed Satisfactory if they contain ‘At least one non-printable character’ (as well as one other condition in this section).

Both of the existing implementations that I know of ( and ) interpret “printable” to mean the same as Python’s isprintable() function: that is Nonprintable characters are those characters defined in the Unicode character database as â€œOtherâ€ or â€œSeparatorâ€, excepting the ASCII space (0x20) which is considered printable.

However, the definition of this function may be rather Python-specific, since its intention appears to be related to language internals like the repr function.

It would be helpful to find out exactly what is meant by “non-printable character” in the RFC.

Also in section 4.2, the RFC mentions ‘”A character from the “Symbol” category’.

The Python implementation excludes Modifier Symbols from its definition. I believe this is incorrect, and have logged an issue on the topic: Some Symbol characters not recognised as such.

It would be helpful to have clarification on this point.

3. What does “different directionalities” mean?

Unicode classifies characters into several Bidi_Classes (for example, U+CED6E is Left_To_Right). In section 4.3. Delightful Confusion Level, the RFC refers to ‘Characters from scripts with different directionalities’.

As far as I can see there are two possible interpretations of this phrase:

Both current implementations interpret this statement like number 1, but I suspect the intention may actually be something more like number 2.

4. What is a Confusable character?

This means a lot of “normal” characters are included: all of the ASCII digits, and many of the Latin letters.

Was this is intention?

That’s all my questions. It has been great fun working on this RFC.

At the ACCU Conference last week I learned about RFC 8771 The Internationalized Deliberately Unreadable Network NOtation (I-DUNNO) from Jim Hague, and thought it would be fun to knock up a Rust implementation.

The project is here: gitlab.com/andybalaam/rust-i-dunno and the docs are published at https://docs.rs/i-dunno.

It’s not done yet, but encoding an IP address as I-DUNNO appears to be working:

Decoding is still to be done.

The implementation is seriously slow at the moment, so I am looking forward to improving it.

I am hoping it is reasonably correct – I based it on the existing Python I-DUNNO implementation and in the process found several potential bugs in that, and created some merge requests to fix bugs and help with testability.

Speaking of testability, I am building up a collection of test cases that could be a potential resource for other implementors, and would welcome suggestions of how this could be shared between projects. The examples so far were generated using the Python implementation, and then manually corrected where I found bugs in that, so I do not have 100% confidence that they are correct.

Anyway, have a play, and send patches and feedback! 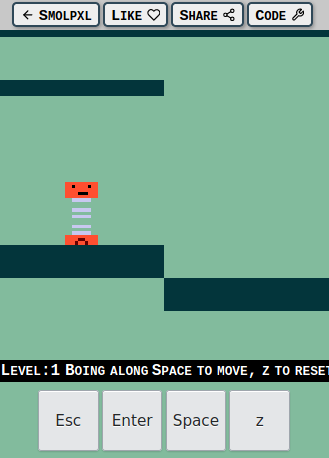 I’ve added a button bar at the bottom (and moved the navigation buttons to the top).

I’m looking for feedback on this: 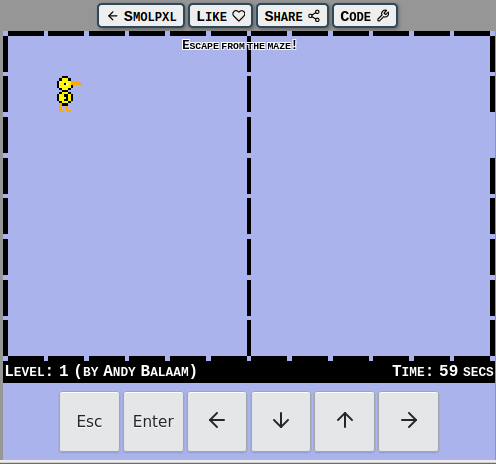 If you’re writing a game and you want to add buttons like this, you just need to add a single line like this:

and they should appear.