8% is a small amount and the end of the year is a long time in the future. We need immediate action to change Russia's course. Please use all your influence to this end.

Some suggestions, as a minimum:

There are many more things which could and should be done, by January 2023 there will be no Ukraine to defend.

As a third line support engineer

This results in the following being reported by the second level support agent monitoring the client logs:

What we, as Third Line Support, want is to know which server class throws the exception, ideally without grepping the code base or opening the server logs.

A better Exception message would be:

This is the motivation for the StackAwareException, a wrapper exception which adds the class, method and line number of the first element of the wrapped exception's stack trace.

The Oracle Ecosystem instance that I inheritted was designed from 2000 and went live in 2004. Its centre piece Oracle Workflow went end of life that year but had new versions through to 2007. In its own way it was a pinnacle of a certain view of software, the software vendor as a one stop shop, in the same way as DEC and IBM had previously sold their systems. 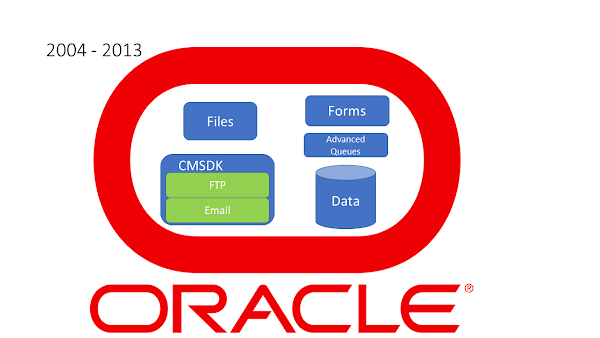 A whole set of components which were guaranteed to work together, with technical support. I probably would have made the same choice, even as late as 2000. This system was the largest system (by disk storage used) in Europe for a while. Housed in a purpose built computer room. Then came AWS S3 cloud storage. 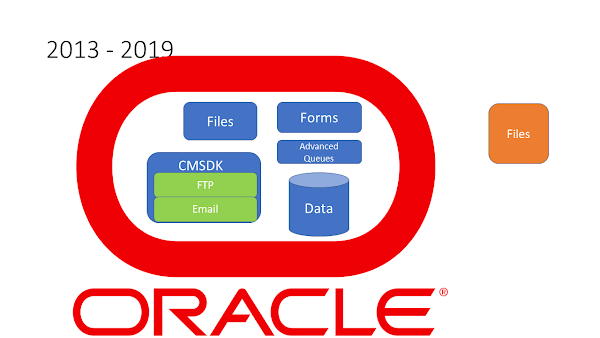 The 'replacement' system migrated eighty percent of the files out of the database, seemingly unaware of the eighty-twenty rule, and duplicated the data and the dataflows. The replacement system was a 'microservice architecture' joined by a single datastore. The users now had two systems to use and were stuck with a 2000 vintage user interface. The next step was to stop using the Oracle Forms and introduce a modern three tier web application, choosing the new, shiny AngularJS as the front end, Hibernate on java as the middleware. 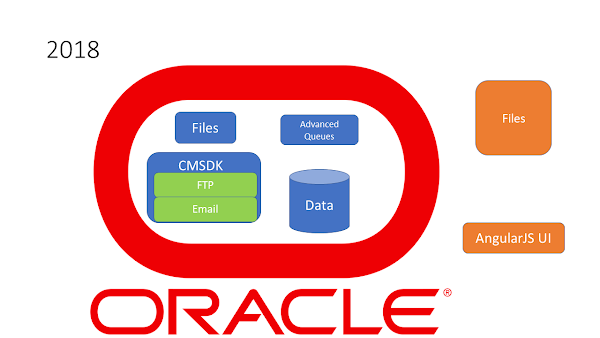 This was understandabley a big job, the UI was now on AWS but the data was in a data centre (a commercial one by now). The need to quit the data centre motivated the removal of CMSDK (Content Management Software Development Kit) from inside the database to separate, external, email and SFTP handling systems, to reduce databse size and enable security in the cloud. 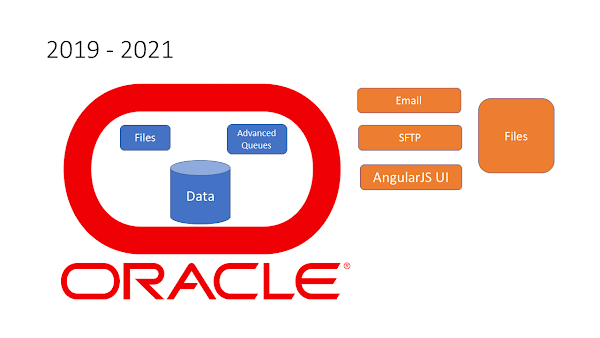 The remaining steps are to finsh the migration of files (who knew this would be the difficult bit) and to migrate from Oracle AQ (Advanced Queues (software naming error 101: avoid hubristic adjectives)) to AWS SQS (Simple Queueing Service (software naming error 102: avoid indexical adjectives)). Note that we have to upgrade AngularJS to Angular just to stay still, and pop things into Kubernetes, just because. 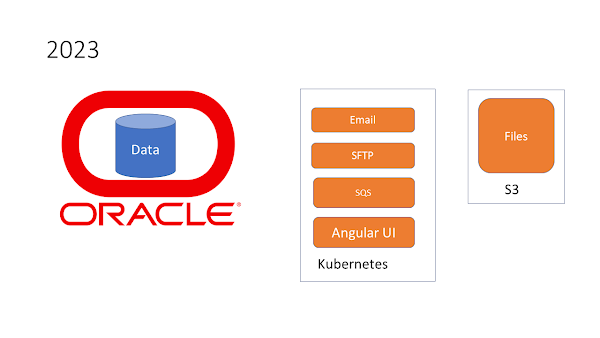 This is clean, recogisable, manageable and stable. We could rest here for a while; but all that pain motivates completion: 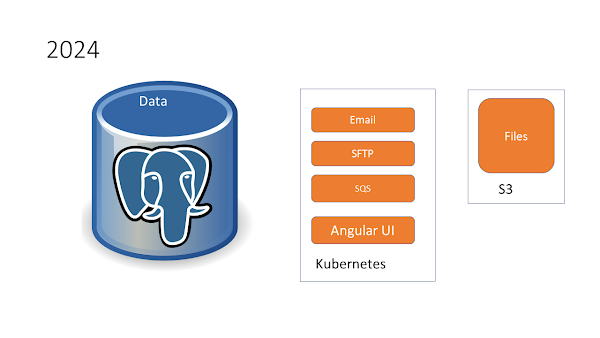 The elephant is in the room. The final step is then to replace Oracle Workflow with Camunda. 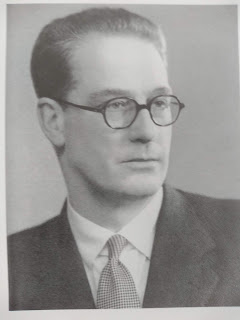 worked at Churchillâ€™s Toyshop (M.D.1) as the head civilian engineer during WWII. 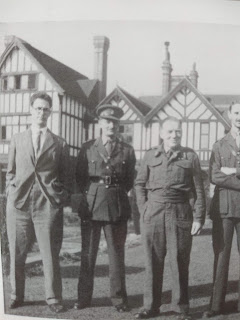 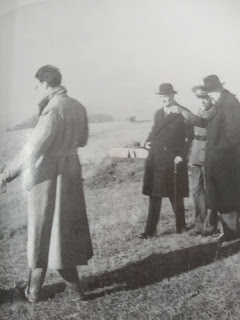 Place the following in a command file, run it within your repo: Then git push -f origin master Note that this process is very slow so do not repeat for every change: add all the changes you want to make and perform in one pass.

The problem with disaster planning is that it is not rehearsed. When you need to retrieve a file from backup is when you discover that your backup has been broken for three months.

Modern cloud systems, based upon software defined infrastructure and redundant, auto-scaling fleets of micro-services, come with disaster recovery built in. They are designed to be resilient against DDoS attacks, unexpected peaks in usage and continent wide unavailability.

Some systems have yet to migrate to outsourced infrastructure, some never will migrate. For these systems we need a Disaster Recovery Strategy which can be implemented within reasonable costs and ideally does not suffer from the fails when needed feature of many backup systems. One answer is to do regular fire drills. No one would dispute the importance of fire drills in saving lives and ensuring that people know what to do in the case of a real fire, however we all know there is a big difference between a rehearsal and the real thing.

The key insight in the modern cloud architectures is that every version of a system is the same (at a particular time).

We can reduce this to a minimal redundant system: a pair of identical systems with one designated Primary and the other Secondary, with a standard data mirroring link from Primary to Secondary.

To ensure that both elements of the pair really can function as the Primary you could rehearse a cutover one weekend.

But if the two systems really are identical then there is no reason to reverse the cutover at the end of the rehearsal. The old Secondary is the new Primary, the old Primary is the new Secondary. The Primary can be swapped at a periodicity the business is comfortable with, say twice a year.

This Dynamic Redundancy strategy ensures that your Disaster Recovery works when you need it to and can be adjusted according to the business' appetite for risk.

I want to change to change the name of a sonarqube project. This cannot be done without performing another analysis. You can just do it in SQL https://stackoverflow.com/questions/30511849/how-to-rename-a-project-in-sonarqube-5-1 but you have to be able to login to the database. Postgresql is very secure. A quick fix is to edit /var/lib//pgsql/pg_hba.conf change local connections from ident to trust: Now you can edit: and finally:

Hi, I have submitted the following via the questionnaire:
The Oxpens bridge should move upstream to parallel the railway bridge with a path extension besides railway to station. Getting from Thames/railway station to canal towpath and up to Kidlington Airport and Kidlington new housing extension needed. Second bridge, again parallel to rail bridge needed to access Science Park.
I have used the Thames towpath for commuting to Osney Mead industrial estate for three months and for work on Cornmarket for three years. I also used the path for three months to commute to Kidlington (Oxford Airport) but it is too arduous and much to my sadness I now cycle on the road, so have trenchant views on the difficulty of cycle commuting in Oxford. I understand that there is a plan to build many new houses in the Kidlington gap, between Summertown and Kidlington. These new commuters would very much appreciate a functioning cycle route into the centre of town. The new Oxford Parkway should be integrated into this cycle route. The problem facing cyclists is not how to get from the towpath to the Centre, this is served by the pipe bridge, the pedestrian crossing down stream and Folley Bridge. What is needed is easy access to the railway station which could be easily achieved by a bridge parallel to the railway bridge and then along railway land to the station itself. Cyclists wishing to get from the Thames to the canal have to continue to Osney, cross the road and then fiddle around the Thames onto the canal path, which is in a very poor state, then up to Kingsbridge and all the way through Kidlington to the Oxford Airport. Finally the Thames path should connect the Science Park, and the planned new housing at Littlemore. This again could be achieved by a cycle bridge parallel to the existing railway bridge down stream from the bypass underpass. I really welcome the proposals but would urge you to consider extending its scope and vision. This could be such a good route and would show that Oxford is a cycling city. best regards Tim Pizey -- Tim Pizey - http://tim.pizey.uk/

More than twelve years ago Tim Joyce passed on some programming wisdom:

This was a bit abstract for me at the time but last night it came back to me as what is wrong with the code I am currently working on. We store our application configuration in a table in the system's target database and whenever some configuration is needed it is looked up in the database. There was no problem with this approach when the code was written because JUnit had not been invented and testing was not the main part of our discipline. However to write a test we would need a database present, which is an obstacle to fast, distinct, unit tests and has been a blocker to writing tests.

By adding sftpPath to the class constructor we can test the business logic without the need for a database fixture.